99% of US airports not screening employees - The Horn News 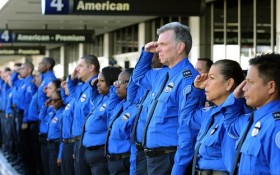 The Department of Homeland Security has just made a shocking admission – it has only been performing daily security checks on employees at three airports nationwide. And critics say this means it would be very easy for terrorists (or just crazed, long-wolf attackers) to infiltrate the system.

Judicial Watch is reporting that DHS officials at a Senate Commerce Meeting earlier this week testified that only three airports — Atlanta, Miami and Orlando — require their employees to go through security checks before work.

This is increasingly alarming due to the fact that employees are also not properly vetted. The Horn News previously reported that 73 private employees at nearly 40 airports nationwide were flagged for potential ties to terrorism.

The Senate Commerce meeting was scheduled due to increased security concerns following the Belgium terrorist attacks. Robert Neffenger, head of the Transportation Security Administration, acknowledged that improvements must be made to the nation’s airports, but provided no explanation as to why employees are not properly screened.

The report also attempts to argue that daily screening of employees “is incapable of determining a person’s motivations, attitudes and capabilities to cause harm, among other limitations.”

This absurd argument undermines the importance of airport security all together and isn’t the only criticism airports have come under for their poor security.

Lawmakers on Tuesday say they will push proposals to boost security at airports, as well as train stations and other transportation hubs in response to attacks by the Islamic State in Brussels and elsewhere.

The initiatives outlined would double from 30 to 60 the number of government “viper teams” that stop and search suspicious passengers in public areas before screening, often using bomb-sniffing dogs. They also want more federal grants to train law enforcement officers in how to prepare for and respond to shootings at vulnerable targets such as transportation hubs and other “soft targets.”

“What happened in Europe must serve as a wakeup call for the United States,” said Sen. Chuck Schumer of New York.

Lawmakers plan to add the ideas to an aviation policy bill under consideration in the Senate, along with a bipartisan measure to tighten the screening of workers who have access to airport restricted areas.

The screening bill, passed by the Senate commerce committee in December, would give the TSA ready access to additional terrorism-related databases maintained by the intelligence community when vetting airport workers. It also would let TSA conduct real-time, continuous criminal records checks through the FBI and expand the list of criminal convictions that would make a potential airport worker ineligible for security clearance.

Another bill passed by the House and the commerce committee last year with bipartisan support seeks to expand the number of passengers enrolled in TSA’s expedited clearance programs by giving the agency the ability to vet more people. It also is expected to be offered for inclusion in the aviation bill.

Homeland Security Secretary Jeh Johnson endorsed the proposals. He said the U.S. has no intelligence to indicate violent extremists are plotting a Brussels-style attack in the U.S., but it is important to remain vigilant against “self-radicalized lone actors” at public places and events.