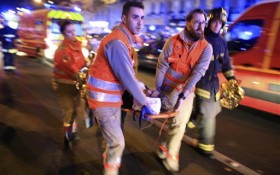 A new video released by the Islamic State group purports to show the extremists who carried out the Nov. 13 attacks in Paris committing atrocities in ISIS-controlled territory while plotting the slaughter in the French capital that left 130 people dead and hundreds wounded. The group also threatens Britain.

The 17-minute video, released Sunday, shows the extent of the planning that went into the multiple attacks in Paris, which French authorities have said from the beginning were planned in Syria. It also is likely meant to serve as a recruitment tool to rally followers to the extremists’ sinister cause.

All nine men seen in the video died in the Paris attacks or their aftermath. Seven of the attackers — four from Belgium and three from France — spoke fluent French. The two others — identified by their noms de guerre as Iraqis — spoke in Arabic.

Seven of the militants, including a 20-year-old who was the youngest of the group, were filmed standing behind bound captives, described as “apostates,” who were either beheaded or shot.

“Soon on the Champs-Elysees,” says Samy Amimour, who was raised in a Paris suburb near the French national stadium, as he holds a captive’s head aloft.

The Nov. 13 attacks targeted a packed concert hall, a restaurant and cafe, and a soccer match at the national stadium.

Immediately after the attacks, French President Francois Hollande imposed a nationwide state of emergency that is to remain in place until Feb. 26. Hollande has asked for an extension and reiterated that request Monday.

“No threat will give France pause in what it must do against terrorist. And if I have taken steps to extend the state of emergency, it is because I am aware of the threat and that we will not concede,” Hollande said in response to the video.

French Foreign Ministry spokesman Romain Nadal said the government is studying the video but would not comment on its contents.

The video was apparently filmed before the men slipped back into Europe and contains no footage shot by the attackers during the days of terror that began Nov. 13 and ended only on Nov. 18 with the death of Abdelhamid Abbaoud, who was believed to be the leader of the attacks and who died in a police raid on an apartment near the Stade de France.

Instead, it was assembled from news video, amateur video and material shot before the men left for Paris. The video did not specify where the nine men were filmed, but it was believed to have been in ISIS-controlled territory in Syria. Abbaoud is seen simply speaking in a room.

One of the suicide bombers that night, Brahim Abdeslam, is seen at a makeshift shooting range. Abdeslam, whose brother Salah fled Paris that night and remains at large, blew himself up at a Paris cafe where he was the only victim. Salah Abdeslam is not seen in the video.

According to the anti-Islamic State activist group Raqqa is Being Slaughtered Silently, Brahim Abdeslam and two other attackers were trained in Raqqa, the extremist group’s stronghold and the capital of its self-proclaimed caliphate.

In the video, as in other Islamic State propaganda trying to drive a wedge between European Muslims and their governments, the men say it is a religious duty to join them.

They threaten more attacks in Europe, and the footage closes with one of the militants holding a severed head and footage of Cameron giving a speech — with a text in English warning that whoever stands with the unbelievers “will be a target for our swords.”

The video was released by Alhayat, the Islamic State group’s media arm.