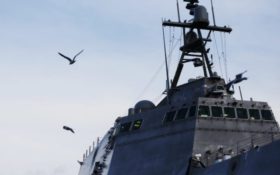 A 96-year-old World War II veteran who dreamed of returning to a U.S. Navy installation to reminisce about his 20-year naval career is getting his wish.

The senior community where Delbarone lives in East Greenwich contacted a Denver-based nonprofit, Wish of a Lifetime, to arrange the visit.

The naval station has hosted reunions for World War II veterans, but requests have dwindled as the veterans aged.

Base spokeswoman Lisa Rama says they make every effort to let veterans visit because it’s the right thing to do.

Delbarone will meet with sailors to share stories and see the port operations.