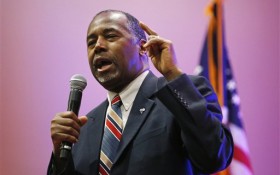 Both Republican presidential candidates Donald Trump and Ben Carson have made claims of alleged Muslim celebrations after the 9/11 terrorist attacks. As the backlash begins, only one of them is still standing by his word.

On Monday, Donald Trump claimed that he saw “thousands and thousands” of Muslims celebrating the 9/11 attacks in Jersey City.

He clarified his statement Tuesday, saying he “saw people getting together and in fairly large numbers celebrating as the World Trade Center was coming down” both “on television and I read about it on the Internet.”

Trump then said he’d received hundreds of calls and tweets in recent days from people telling him they’d also witnessed the scenes he described.

As evidence, Trump cited a Sept. 18, 2001, story in The Washington Post that said in the hours after the attacks, authorities “detained and questioned a number of people who were allegedly seen celebrating the attacks and holding tailgate-style parties on rooftops while they watched the devastation on the other side of the river.”

Meanwhile, fellow Republican presidential candidate Ben Carson is backing away from his Monday claim that he saw American Muslims celebrating the Sept. 11 attacks.

A spokesman for the retired neurosurgeon said Carson “does not stand behind” his statement to reporters hours earlier that he also saw news reports of Muslims in New Jersey cheering the 2001 terrorist attacks.

“He does not believe Muslim Americans in New Jersey were celebrating the fall of the Twin Towers,” Carson spokesman Doug Watts said. “Rather he recalls the ample news footage of crowds in the Middle East celebrating the tragic events of 9/11.”