90-year-old barber hangs up the clippers - The Horn News 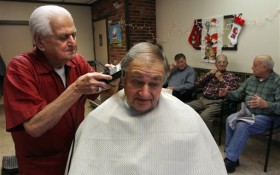 A 90-year-old Rhode Island barber is putting down his clippers after 68 years.

Tony Manzi has cut five generations of hair at Manzi’s Barber Shop in Cranston. The Providence Journal reports (http://bit.ly/1QTeSgg ) the man known locally as Tony the Barber is set to retire Thursday.

Manzi says he’s “down in the dumps” about leaving but it’s time. Glaucoma has blurred vision in one of his eyes. He wears reading glasses for close shaves around the ears.

He describes the bowl cut as “just about the ugliest thing” he has seen and says he doesn’t understand modern “novelty” haircuts such as the Mohawk.

Manzi says he plans to do nothing but he has two children and five grandchildren to keep him occupied.