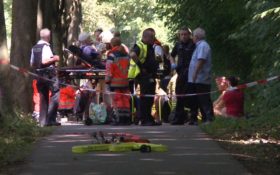 A crazed man armed with a knife attacked passengers on a crowded bus Friday in the northern German city of Luebeck before being overpowered and arrested, authorities said. Nine people were reported injured, one seriously, in what witnesses called a “bloodbath.”

Authorities say the assailant’s motive for the attack on a city bus in Luebeck, which is near the Baltic coast northeast of Hamburg, wasn’t radical Islamic terrorism, but they’re investigating all options.

Prosecutor Ulla Hingst told n-tv television the bus driver stopped the vehicle and let the passengers out after the attack. She said the weapon used was apparently a knife, but that is still under investigation.

Experts also examined a backpack on the bus as a precaution. Hingst said it wasn’t clear whether it belonged to the suspect, but there had been reports of smoke coming out of it.

Police and prosecutors later said in a joint statement that investigators found a flammable substance in the backpack, but no explosives.

They said that the suspect was identified as a 34-year-old German citizen who lives in Luebeck. His name wasn’t released, in line with German privacy rules.

Schleswig-Holstein’s state interior minister, Hans-Joachim Grote, said his information was that nine people were injured — six with the knife, two passengers who fell, and the driver, who was punched.

The statement from police and prosecutors said that one of the injured was seriously hurt, but said the total number of injured was unclear.

The bus was traveling from Luebeck to the neighboring seaside resort of Travemuende, where an annual regatta, the Travemuender Woche, was opening later Friday.

Grote said that authorities believe security for the regatta is sufficient.