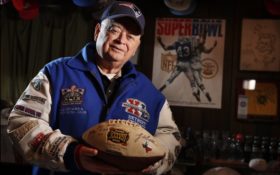 Donald Crisman has more than a half-century of Super Bowl memories behind him, from taking a 24-hour train ride to Super Bowl II to seeing his beloved New England Patriots win in overtime last year.

But he says the 52nd Super Bowl featuring the Philadelphia Eagles and the Patriots on Sunday just might be his final big game.

The 81-year-old resident of Kennebunk, Maine, is a member of the ever-shrinking “Never Miss a Super Bowl Club” that’s attended every season finale since its inception in 1967. He has bought his own ticket every year except one.

Crisman was featured in a 2010 Visa commercial along with three friends who had attended every Super Bowl. He is attending this game with a heavy heart because friend Larry Jacobson of San Francisco died last fall. Crisman said attending the game without Larry would be different, and he might not have gone if the Patriots weren’t in it.

He shared some of his favorite memories with The Associated Press.

Crisman prefers the warmer venues for the Super Bowl. But he has fond memories of the last Super Bowl in Minneapolis — in 1992 at the now-gone Metrodome.

He has a hat from the game bearing the Super Bowl XXVI logo that was signed by Washington Redskins coach Joe Gibbs, quarterback Mark Rypien and wide receiver Gary Clark. He is bringing it with him to this year’s game at U.S. Bank Stadium, built on the site of the old Metrodome, to “show and tell it.”

Crisman’s trip to the second Super Bowl in 1968 was an odyssey. He had made arrangements to take a private plane to the game in Miami but an ice storm made it impossible to fly.

Crisman was undaunted and managed to find a train that took 24 hours to get to Miami. “I can’t believe how many times that train stopped,” he said. “It was agonizing, to say the least.”

The Miami area, which will set a record by hosting its 11th Super Bowl in 2020, is Crisman’s favorite place to see the game. He’s also a fan of San Diego, which has hosted three times.

Crisman is “not a fan of these winter bowls,” occasionally held at indoor stadiums in Indianapolis, Detroit and Minneapolis. But when asked about his worst experience at a Super Bowl venue, he cannot think of one.

The Rhode Island native has been a Patriots fan since the team’s inception in 1960, so his favorite Super Bowl play of all time is fittingly James White’s overtime, game-winning touchdown last year. Previously, he was the subject of endless teasing because his favorite plays were a pair of field goals.

Specifically, field goals that won Super Bowls for the Patriots in 2002 and 2004.

“I’ve been laughed at and kind of ridiculed. ‘You can’t have a field goal be your favorite play,’” he said. “Well, I do.”

WILL HE KEEP GOING?

Crisman’s crew at the Super Bowl included Jacobson and Pittsburgh Steelers fan Tom Henschel and Green Bay Packers fan Bob Cook, who also had attended every game. But the group has dwindled to just him and Henschel after the death of Jacobson last year and Cook, who died in 2011. He’s welcoming Jacobson’s daughter Heather on Sunday and expects to shed a few tears when she sits in what would have been her dad’s seat.

His son, Don Jr., called his dad “the most consistent force in football.” He said it will be different when his father no longer goes to the big game. After 51 Super Bowls and counting, the elder Crisman said that day might be coming soon.

“I’m thinking about it,” he said. “But this year, I’m taking the Patriots.”