8 major Trump wins (the media HATES this) - The Horn News 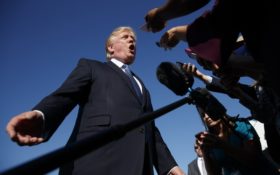 President Donald Trump has followed through on dozens of his campaign promises — and this list of eight of his major accomplishments is sure to enrage liberals.

During his first year in office, Trump has  successfully overhauled the country’s tax system, changed the U.S. posture abroad and upended the lives of hundreds of thousands of immigrants. He has also won confirmation of a conservative Supreme Court justice and other federal judges — everyone of which he promised to do.

With all of his outstanding accomplishments during his first year in office, America awaits what is to come during his second year.

For all his rogue tendencies, Trump has shaped up as a largely conventional Republican president when measured by his promises kept and in motion.

The Twitter version of Trump may be jazzed with braggadocio about the size of his nuclear button and his “very stable genius.” But the ledger of actions taken is recognizable to Washington: mainstream Republican tax cuts, pro-business policy, curbs on environmental regulation and an approach to health care that’s been in the GOP playbook for years.

A look at some of his campaign promises and what’s happened with them:

Trump and congressional Republicans delivered on an overhaul that substantially lowers corporate taxes and cuts personal income taxes, as promised. He 21 percent tax rate for corporations, a major drop from 35 percent. He did not eliminate the estate tax or the alternative minimum tax. but fewer people will be subject to those taxes.

Trump made good on his promise to withdraw the U.S. from the Trans-Pacific Partnership trade agreement and to reopen the North American Free Trade Agreement in search of a better deal.

He’s let China off the hook, though, on his oft-repeated threat during the campaign to brand Beijing a currency manipulator, a step toward potentially hefty penalties on Chinese imports and a likely spark for a trade war.

“We’re like the piggy bank that’s being robbed,” he said of the trade relationship, which has tipped even more in China’s favor since. Trump now threatens trade punishment if China does not sufficiently cooperate in reining in North Korea.

Trump promised to impose a 35 percent tariff on goods from U.S. companies that ship production abroad. Instead, his tax plan aims to encourage companies to stay in the U.S. with the lower tax rate and to entice those operating abroad to come home by letting them repatriate their profits in the U.S. at a temporarily discounted rate.

Candidate Trump rocked the political landscape when he proposed a temporary ban on all non-U.S. Muslims entering the country. While he’s long backed away from such talk, Trump has worked since his first days in office to impose new restrictions on tourists and immigrants, signing executive orders that would have made good on his anti-immigration promises had those orders not been blocked by courts.

He’s now succeeded in banning the entry of citizens from several Muslim-majority countries and in severely curbing refugee admissions. He’s tried to deny certain federal money for cities that refuse to cooperate with federal immigration authorities.

Trump is now deep in negotiations over an immigration deal that could deliver on other promises, including money for the border wall with Mexico and overhauling the legal immigration system to make it harder for immigrants to sponsor their families. That’s in exchange for extending protections for hundreds of thousands of young people brought to the country illegally as children.

#4 — ENERGY AND THE ENVIRONMENT

Trump promised aggressive action on the energy front and has pursued that.

He announced his intention to take the U.S. out of the Paris climate-change accord. He gave swift approval to the Keystone XL and Dakota Access pipelines stalled by President Barack Obama, moved to shrink protected national monument lands in Utah and Arizona, and acted to lift restrictions on mining coal and coastal drilling for oil and natural gas.

A provision in the new tax law opens the long-protected Arctic National Wildlife Refuge to drilling.

As other countries turn harder toward green energy, Trump is making fossil fuels the centerpiece of his drive toward energy independence — a benchmark that Obama closed in on during an era of surging natural gas development.

Probably nothing exemplifies frustrated ambition more than the Obama health law Republicans have been trying to dismantle ever since it was enacted in 2010.

Republicans took several runs at repealing and replacing the law last year, only to fall short. The December tax law, though, is knocking out a pillar. As of 2019, the requirement to carry health insurance or pay a fine will be gone.

Trump has come out with a proposed regulation to promote the sale of health plans across state lines. The goal is to make it easier for associations to sponsor plans that are cheaper than Affordable Care Act policies but don’t have to meet all consumer protection and benefit requirements of that law.

Insurance industry groups, patient groups and some state regulators are wary of the idea and see little chance it can make more than a dent in the ranks of the uninsured (nearly 30 million). Easing restrictions on the sale of health insurance across state lines has been a longtime mainstream conservative goal.

Trump promised swift victory over the Islamic State group. Over the past year, U.S. and coalition-backed local forces in Iraq and Syria did deal a crushing blow to IS, ousting the militants from most of the territory they once held. The success built on the strategy of the Obama administration to work with and through local forces. Trump did relax restrictions on the number of U.S. troops who could be deployed both to Iraq and Syria, and that aided the final push.

The Pentagon has yet to see the massive increase in military spending that Trump has promised. That still might come, but the protracted struggle to pass a Pentagon budget of whatever size has hurt U.S. military readiness, defense officials say.

More broadly, Trump’s “America First” ethic has been reflected in his pressure on member NATO countries to step up their own military spending, in his wariness of international accords and in the seeming drift from a diplomatic tradition of promoting U.S. democratic values abroad.

Past presidents made common cause with authoritarian figures, and their promotion of values could be cursory. But Trump has lavished praise on select strongmen, from the Philippines to China to Russia and beyond.

Despite railing against the Iran nuclear deal as a candidate, Trump has so far passed up opportunities to get the U.S. out of it. On the other hand, he rolled back part of Obama’s opening to Cuba. He also moved forward on recognizing Jerusalem as the capital of Israel, a goal that both parties have embraced in their platforms for decades but never acted on.

Trump pledged a $1 trillion effort to rebuild the country’s airports, roads, bridges and other infrastructure. As with his tax plan, it’s shaping up to be significant. Trump’s idea appears to involve using federal tax dollars to leverage state government and private spending, not to mount a New Deal-era explosion of federal projects.

Having previously criticized the Department of Veterans Affairs as the “most corrupt,” Trump delivered on one campaign promise by signing legislation to make it easier for VA employees to be fired for misconduct.

At least for now, its impact in bringing accountability to the department remains unclear. The pace of VA firings during Obama’s last budget year was higher than during Trump’s first, which covered the first nine months of his administration.

Other Trump initiatives announced with fanfare in 2017 remain far from complete or have been limited because of questions about rising government costs: a multibillion-dollar overhaul of electronic medical records, expanded access to doctors to reduce wait times and a goal of hiring 1,000 additional mental health counselors in the first year. The VA has been clouded by a 2014 scandal at the Phoenix VA hospital in which employees manipulated records to hide appointment delays.

Are you happy with Trump’s progress in his first year? Vote here and share your thoughts!

Do you think Trump kept his promises during his first year?