8 men sentenced to jail for enslaving fishermen - The Horn News 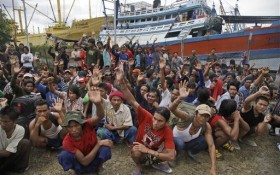 Five Thai fishing boat captains and three Indonesians were sentenced Thursday to three years in jail for human trafficking in connection with slavery in the seafood industry.

The suspects were arrested in the remote island village of Benjina last May after the abuse was revealed by The Associated Press in a report two months earlier. The men were tried separately in Tual, an island in southeastern Maluku province, about 2,900 kilometers (1,800 miles) east of Jakarta.

The three-judge panel also ordered the defendants to pay fines of about $12,250 each or serve two more months in jail. In addition, the Thai captains — Youngyut Nitiwongchaeron, Boonsom Jaika, Surachai Maneephong, Hatsaphon Phaetjakreng and Somchit Korraneesuk — have to pay a total of $67,800 in compensation to their crew members.

“They all have been proven guilty of violating the anti-human trafficking law,” said Edi Toto Purba, who led the panel. “They deserve the jail sentences as well as the fine.”

He gave one week for the prosecutors, who had sought heavier sentences, as well as the defendants to appeal the verdict. Indonesian prosecutors had demanded prison sentences of up to 4 1/2 years for the five Thais and Indonesian Hermanwir Martino, and 3 1/2-year sentences for two other Indonesians, Yopi Hanorsian and Muklis Ohoitenan. They also demanded compensation ranging from $3,750 to $26,000 for the crew members.

Thirteen fishermen from Myanmar testified under protection of Indonesia’s Witness and Victim Protection Agency. They told the court they had been tortured, forced to work up to 24 hours a day and not paid. They also said they were locked in a prison-like cell in a compound owned by fishing company Pusaka Benjina Resources, which has since been shut down. Martino and Ohoitenan worked for the company, and Hanorsian was known as the “enforcer” among the fishermen, who accused him of beating and torturing them in front of an Indonesian flag until they collapsed.

Some workers were angered by the outcome.

“They should be sentenced more because they tortured many fishermen for years. It’s not fair for us,” said Win Ko Naing, 26, who was enslaved in Benjina for almost six years. He has been following the case closely from Myanmar, but did not testify at the trial.

“They will never pay us compensation because they know how to get away from punishment,” he added. “I will never forget what they did to many people over many years. Three years imprisonment is too easy for them. ”

The AP investigation found that thousands of poor migrant fishermen, mostly from Myanmar, Cambodia and Laos, were recruited in Thailand and brought to Indonesia using fake travel documents where they were subjected to brutal labor abuses. Some had been enslaved for years or decades. The AP found some men locked in a cage and saw others calling out for help over the railing of their trawler. A company graveyard with dozens of bodies buried under fake names was also located. The Indonesian government carried out a dramatic rescue in Benjina in April, just over a week after the report ran.

More than 2,000 men were freed and sent home last year as a result of the investigation, which traced slave-caught seafood to some of the most well-known U.S. grocery stores and pet food brands, including Wal-Mart, Sysco, Kroger, Fancy Feast, Meow Mix and Iams. In addition, U.S. congressional hearings have been held, legislation has been changed, more than a dozen people have been arrested and multi-million dollar seafood cargo ships have been seized.