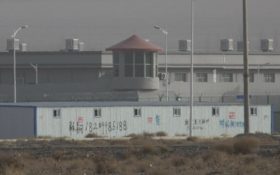 A 71-year-old Roman Catholic priest has been sentenced to federal prison for breaking into a Navy submarine base in Georgia with a group protesting nuclear weapons.

A U.S. District Court judge sentenced the Rev. Stephen Michael Kelly on Thursday to 33 months in prison. He’s already served most of that sentence, as the judge gave Kelly credit for the roughly 30 months he spent behind bars awaiting trial and sentencing since his arrest in April 2018.

A year ago, Kelly and six fellow activists were convicted by a jury of trespassing, destruction of government property and other charges stemming from their arrest at Kings Bay Naval Submarine Base.

The activists in 2018 took videos of themselves using wire cutters to enter a locked security gate at Kings Bay, the East Coast hub for Navy submarines armed with nuclear missiles. Inside the base, they spray-painted anti-nuclear messages and hammered on an outdoor display.

Defense attorneys had argued in pretrial hearings that the activists shouldn’t be prosecuted because they acted on sincere religious beliefs. Judge Lisa Godbey Wood ruled they couldn’t use that defense at trial.

Federal prosecutors said in a news release that Kelly had previously served more than eight years in prison for similar trespassing and vandalism convictions. They said the priest was on probation when he was arrested at the Georgia base.

The judge previously sentenced another of the activists, 80-year-old Elizabeth McAlister, to the 17 months and nine days she had already served — allowing her to be freed. The remaining five are still awaiting sentencing.