For Sale: This entire South Dakota town - The Horn News 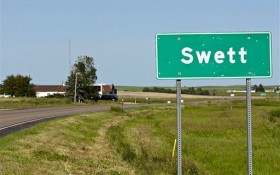 The southwestern South Dakota ghost town of Swett is once again for sale, and this time the asking price is a lot cheaper.

Swett is home to about 6 acres of land, an empty house reputed to be haunted and a closed bar. It first went on the market in June 2014, for $399,000. It generated interest around the world, but the three written offers fell through for various reasons.

Real estate agent Stacie Montgomery told the Rapid City Journal that she’s put the town southeast of Rapid City back on the market, at a reduced price of $250,000. The tract was cleaned up, with three decaying mobile homes and an aging transport truck removed.

Swett isn’t the only town in the area put up for sale in recent years. In 2011, a Philippines-based church bought most of the town of Scenic, paying $700,000.

Montgomery said when Swett went on the market last year, she got hundreds of emails and calls from prospects as far away as China, Russia and Australia. She said she got several verbal offers in addition to the written ones.

Those who showed interest in buying the town included people who wanted to be mayor or live off-grid, and production companies considering reality shows, Montgomery said.

One pitch, Montgomery said, was from a Nebraska man who wanted to bring in 2,000 women from Russia and 600 men who are felons, build houses and run cameras nonstop.

Montgomery still gets phone calls about the town, she said.

“It’s been a year and a half and people still want to know about Swett,” Montgomery said.