60 years ago, Dwight D. Eisenhower warned us… (but we didn’t listen) - The Horn News 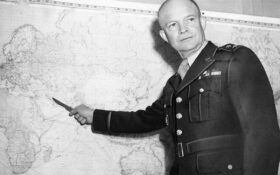 President Dwight D. Eisenhower’s final speech as president is best remembered for its warning of the rise of what he called the “military-industrial complex.”

And today, liberals have embraced those words as if Ike were one of their own.

But the conservative Republican president also issued another warning on that day in 1961 that the left would likely rather forget.

Because as a new report in Red State points out, Eisenhower seems to have warned Americans about all of the tactics liberals are using today.

Eisenhower predicted the rise of a “scientific-technological elite” dominating both universities and government at the same time, conducting not just research but also having a heavy hand in making policy.

“Today, the solitary inventor tinkering in his shop has been overshadowed by task forces of scientists in laboratories and testing fields,” he said.

Much of that work, he said, is done in universities, which are collecting cash from the federal government. Eisenhower warned that has led to a situation where “a government contract becomes virtually a substitute for intellectual curiosity.”

The prospect of domination of the nation’s scholars by Federal employment, project allocations, and the power of money is ever present and is gravely to be regarded. Yet, in holding scientific research and discovery in respect, as we should, we must also be alert to the equal and opposite danger that public policy could itself become the captive of a scientific-technological elite.

It’s those last words that seem especially chilling today, as the scientific-technological elite of Silicon Valley rise in influence and in many ways become even more powerful than government.

Earlier this year, RealClearInvestigations came up with another term for it… one right out of Eisenhower’s playbook: the digital-intelligence complex, as Big Tech figures move easily in a revolving door between high-level government positions and top Silicon Valley firms.

Or as the website put it, “a symbiotic relationship in which the lines between one and the other are blurred.”

And as many have pointed out especially over the past year, that’s led to changed dynamic between the government, the industry and the public.

Where Americans once feared being censored by the government, now it’s Big Tech censoring government officials, as well as ordinary Americans who don’t toe the line.

But as Christian Sorensen of the independent think tank the Eisenhower Media Network wrote in an essay, those same companies have no problems doing business with agencies such as the CIA and the military.

“If Big Tech is concerned about violence, then it should stop selling goods and services to the US military establishment,” he wrote.

“Hypocrisy is par for the course,” he added. “Executives from across the war industry condemned the violence at the Capitol. But their business is war — they profit daily from violence overseas.”

Taking it a step further, Trump made bringing the troops home and putting a stop to the endless wars a priority during his administration… which became a threat not only to the military-industrial complex, but to the digital-intelligence complex.

With that in mind, it’s no wonder they all worked together to bring him down… just as Eisenhower warned.

“In the councils of government, we must guard against the acquisition of unwarranted influence, whether sought or unsought, by the military-industrial complex,” he said at the time. “The potential for the disastrous rise of misplaced power exists and will persist.”

Seventy years later, Eisenhower may have been more right than even he could have expected.