6 times Obama committed "treason" against the U.S. - The Horn News 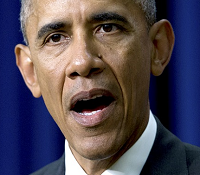 The Deep State went into overdrive accusing President Donald Trump of treason when he refused to endorse the CIA’s claims of Russian interference in a press conference with Vladimir Putin last week.

But it has no problem tolerating former President Barack Obama’s real scandals and crimes against national security.

RINO Senator Jeff Flake – who once called Trump “vile” for accusing Democrats of treason – accused Trump of “giving aid and comfort to an enemy,” which is the legal definition of treason.

Trump’s words were like “the Pearl Harbor attack or Kristallnacht,” according to one MSNBC analyst.

But these haters had nothing but praise when their favorite president, Obama, actually put our nation and its armed forces at risk. Here’s a small sampling of his scandals:

In 2014, Obama traded 5 mid- to high-level detainees in exchange for Bowe Bergdahl, a U.S. soldier captured in Afghanistan. Obama threw a huge press conference, wrapped his arm around Bergdahl and called the trade a huge victory.

Then the truth came out: Bergdahl was a deserter captured after he went AWOL. His brothers sustained major casualties trying to rescue him. One got a serious head wound, and another had to learn to write and brush his teeth all over again after he got his thumb blown off.

Last November, Bergdahl received a dishonorable discharge – but he just barely escaped being sentenced to 14 years in prison. Donald Trump thought that was too light:

The decision on Sergeant Bergdahl is a complete and total disgrace to our Country and to our Military.

It turned out Obama even broke the law in the way he freed the quasi-traitor. By law, Obama had to notify Congress 30 days before springing any prisoner from Gitmo. But Obama didn’t tell anyone until after the release.

Bergdahl has been convicted of his crime – so when will Obama face the music?

In his farewell speech, Obama claimed he “shut down Iran’s nuclear weapons program without firing a shot.”

“The documents obtained by Israel from inside of Iran show beyond any doubt that the Iranian regime was not telling the truth,” said Secretary of State Mike Pompeo.

Not only did Iran outfox Obama on its nuclear program, but it sent large chunks of that money to terrorist groups like Hezbollah and the al-Quds Force.

When Obama ran for re-election, he told a crowd in Miami that he had destroyed the group behind 9/11.

“I said that we’d end the war in Afghanistan – and we are,” he lied. “And today, al-Qaida is on its heels.” A month later, he told Iowa voters he had put al-Qaida “on the run.”

But 6 years later, the war in Afghanistan has no end in sight. And al-Qaida stayed on the offensive all through Obama’s second term.

The media knew it – but kept it under wraps. The New York Times’ foreign correspondent said she saw al-Qaida groups swarming over new territory and wreaking havoc in new countries. Obama’s officials said the groups weren’t related to al-Qaida. But she saw intelligence documents proving these affiliates were “being micromanaged by al-Qaida central” in “Afghanistan and Pakistan.”

Obama made a bald-faced lie that contradicted U.S. intelligence at least as much as Trump’s statement about Russian election-meddling. But it made Obama look good, so no one said a word.

When a reporter asked then-president Obama about the Islamic State in January 2014, Obama called ISIS “the JV team” of terrorism.

That summer, ISIS established a new “caliphate” in Iraq, then conquered huge portion of Iraq and Syria. Within 2 years, the U.S. and our allies had launched 12,000 airstrikes to try to defeat them. Still, they continued beheading Christians, raping girls, even terrorizing the West.

It turns out that U.S. intelligence warned Obama about the danger of ISIS in 2012. One report said ISIS “could also declare an Islamic State through union with other terrorist organizations in Iraq and Syria, which will create grave danger.”

You knew it would be on here. The facts are well-known – but fewer people know intelligence had warned about the dangers facing Benghazi beforehand.

A 2014 Senate Intelligence Committee report said the attacks in Benghazi “were likely preventable,” because Obama had “significant…warnings about the deteriorating security in Libya” from U.S. intelligence. He just ignored them, then sent Susan Rice on five Sunday morning talk shows to blame the whole thing on an anti-Islamic video. That’s a pretty serious, public denial of U.S. intelligence.

Just this week former Obama intelligence official James Clapper admitted that Obama “set off a whole sequence of events which are still unfolding today, notably Special Counsel Mueller’s investigation.” Now there’s no doubt that the efforts to overturn the 2016 election stretch directly to the Oval Office. Millions of American soldiers have fought to defend free elections, and Obama tried to destroy the whole system.

These are just 6 of an endless string of Obama’s scandals.

Every single one of them is more serious than Trump denying the unstoppable superpowers of 12 Russian nerds with laptops.

But in a sense, the D.C. establishment is right: Trump is guilty of treason against the Deep State.

The Deep State – the Ivy League “experts,” bureaucrats and elitists – replaced the Constitution with a secret, one-party government of their own decades ago.

Trump is destroying all that, putting America First and giving the country back to the voters.

Treason to the Deep State is loyalty to the American people.