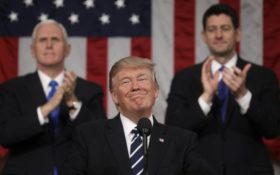 The State of the Union is… Great again!

A year into his presidency, President Donald Trump stands before the nation Tuesday night to account for his promise to “Make America Great Again.”

For both parties, the speech operates like the pop of a starting gun for the midterm elections, when Republicans will defend their majorities in the House and Senate.

A look at what to watch:

White House spokeswoman Sarah Huckabee Sanders on Monday previewed the speech by describing the state of the union as “incredible.”

The president is expected to discuss the tax overhaul he signed in December and the strong economy that helps all Americans. Thematically, Trump is expected to speak of having built the foundation for a safer and stronger nation.

Often who is in the chamber reflects the president’s priorities. Seated around Mrs. Trump will be more than a dozen guests, including small-business owners, beneficiaries of tax relief, victims of gang violence and a police officer who adopted a baby from parents addicted to opioids.

Democrats are strategically populating their guest lists, too — with faces of the illegal immigrants. Their guests will include illegals who are among the nearly 700,000 people who received protection from deportation under the Obama-era Deferred Action for Childhood Arrivals program.

Traditionally, one member of the Cabinet stays away from the address for security reasons. One question is whether Justice Neil Gorsuch, whom Trump nominated for the Supreme Court, will attend the speech. Justice Samuel Alito, who shook his head and mouthed “not true” at President Barack Obama during the 2010 State of the Union speech, has not attended a presidential address since.

Some Democratic cowards have already plotted out a boycott for the president’s address.

Typically, some female lawmakers wear bright colors so they will stand out on television. But this year, several Democratic women plan to wear black to protest sexual harassment after a season of scandals toppled male leaders across industries. Congress is no exception: Accusations have forced resignations and retirements in both parties.

Looking for a little publicity? The speech will be a your-name-here opportunity for campaign donors. The Trump campaign said donors who chip in before the speech can have their names “displayed right under the livestream” of the speech on the campaign website.

Rep. Joe Kennedy of Massachusetts will deliver the Democratic response to the president’s address. He is the grandson of the late Robert F. Kennedy, the senator and U.S. attorney general, and the son of former Rep. Joseph Kennedy II, who served in the House from 1987 to 1999. Democratic leaders are pitching Kennedy as someone who can champion Democratic policies to the middle class.