Details emerge in teen’s sick rape, murder of his teacher - The Horn News 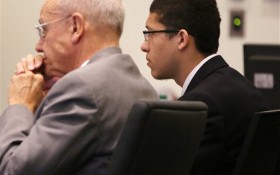 A Massachusetts teenager killed his math teacher and did “unspeakable things” to her body, but he was driven by severe mental illness, his defense attorney told jurors at his murder trial Monday.

Philip Chism, 16, is charged with murder, rape and robbery in the October 2013 slaying of Colleen Ritzer. The body of the 24-year-old Danvers High School teacher was found near the school. She had been raped twice and her throat had been slit.

Chism, who was 14 at the time, has pleaded not guilty and is being tried as an adult in Salem.

Chism, who had moved to Massachusetts from Clarksville, Tennessee, shortly before starting high school, should not be held criminally responsible, his attorney, Denise Regan, told the jury. The teenager was “severely mentally ill” and had suffered from a psychotic disorder since the age of 10, she said.

Prosecutor Kate MacDougall said Ritzer went to school on Oct. 22, 2013, like it was any other day.

“She was doing the job she always dreamed of — teaching math,” she said.

But Chism went to school that day with a “terrible purpose,” MacDougall said. Inside his backpack, he had a box cutter, a mask, gloves and a hooded sweatshirt.

In gruesome detail, MacDougall traced Chism’s steps during Ritzer’s algebra class at the end of the day, then after class. Citing surveillance video from some of the 140 cameras at the school, MacDougall said Ritzer was seen going into a bathroom, followed soon thereafter by Chism. She said Chism came out of the bathroom 11 minutes later, but Ritzer did not.

MacDougall said a student who also stayed after class that day will testify that she saw Chism become visibly upset after Ritzer asked him how Danvers was different from where he lived in Tennessee.

“She sensed that he was irritated with that line of questioning,” MacDougall said.

Chism initially appeared to make some friends and fit in at the high school, but several students had noticed changes in him, his lawyer said. He went from “being very friendly to being very quiet and alone,” Regan said. One of his soccer teammates noticed he was “emotionless” and did not celebrate when he scored a goal.

Regan said that another student who stayed after class with Ritzer the day she was killed noticed that Chism was “looking out the window and mumbling.”

Testimony is scheduled to resume Tuesday, when Ritzer’s mother is expected to testify.