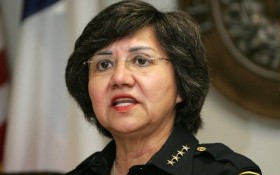 In October, Sheriff Lupe Valdez announced – as part of her re-election campaign – that she would immediately be moving Dallas into line with an estimated 300 other sanctuary cities in the United States.

Now, an illegal immigrant is accused of using his car to assault one of these police officer.

Officials say that the man that ran over and injured an off-duty officer, twice, before being shot by police outside a Dallas nightclub early Monday was in the country illegally. Not only that, but U.S. Immigration and Customs Enforcement spokesman Carl Rusnok says 29-year-old Eduardo Gonzalez-Rios has been previously deported from the U.S. three times.

Gonzalez-Rios has been charged with three counts of aggravated assault against a public servant.

Police say the incident prompted Sgt. Shannon Browning and Sr. Corporal Antonio Barrientos to fire at Gonzalez-Rios. Gonzalez-Rios was wounded in the arm and released from the hospital Tuesday. He is being being detained on in the Dallas County jail.