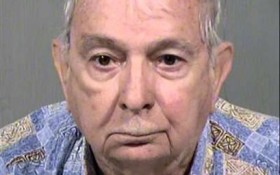 For more than half a century, the unsolved killing of a young schoolteacher and beauty queen who was last seen at church haunted the Texas city of McAllen. 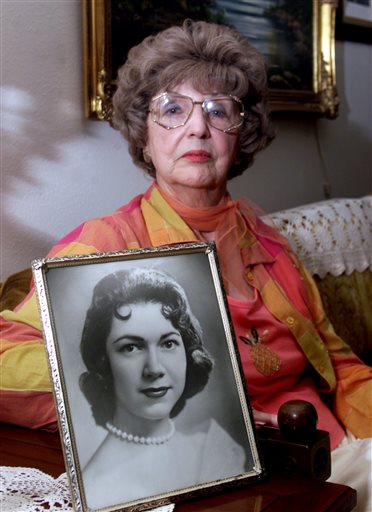 In this April 24, 2003, photo, Herlinda de la Vina holds a portrait of her niece, Irene Garza, the 25-year-old Texas schoolteacher and beauty queen in Edinburg, Texas, who was murdered in McAllen, Texas in 1960.  (Brad Doherty/The Dallas Morning News via AP) MANDATORY CREDIT; MAGS OUT; TV OUT; INTERNET USE BY AP MEMBERS ONLY; NO SALES

But now, nearly 56 years after the bludgeoned body of 25-year-old Irene Garza was pulled from an irrigation canal, police have arrested the man long suspected in her slaying: the former priest who apparently heard her final confession.

Using a walker, a frail-looking John Bernard Feit, now 83, appeared in court Wednesday in Phoenix after being arrested a day earlier at his home in Scottsdale, Arizona, on a murder charge. He was jailed on $750,000 cash bail while he awaits transfer back to Texas.

“This whole thing makes no sense to me because the crime in question took place in 1960,” Feit said, adding that he plans to fight extradition to Texas.

Feit’s arrest followed other investigations over the years, including a grand jury probe in 2004 that concluded there was insufficient evidence to charge him.

McAllen police would not comment Wednesday on what evidence was gathered or presented to the grand jury that finally brought the charge.

“The arrest of John Feit Tuesday night is the first step in providing justice for the murder of Ms. Irene Garza. After nearly 56 years, Ms. Garza’s family and our community will finally see that justice is served,” Hidalgo County District Attorney Ricardo Rodriguez said in a statement.

Authorities said Garza visited Sacred Heart Catholic Church in McAllen, where Feit was a priest, on April 16, 1960. Garza, who was Miss All South Texas Sweetheart 1958, had planned to go to confession that evening. She never returned home.

Her body was found days later. An autopsy found that she had been raped while unconscious and had been beaten and suffocated.

Feit came under suspicion early on, telling police that he heard Garza’s confession — in the church rectory, not in the confessional — but denying he killed her.

Feit later spent time at a treatment center in New Mexico for troubled priests and after that became a supervisor and had a part in clearing priests for assignments to parishes. Among the men Feit helped keep in ministry: child molester James Porter, who assaulted more than 100 victims before he was ultimately defrocked and sent to prison.

Feit left the priesthood in 1972, married and went on to work at the Catholic charity St. Vincent de Paul in Phoenix for a number of years, training and recruiting volunteers and helping oversee the charity’s network of food pantries, said executive director Steve Zabilski.

He said the charity knew about the suspicion that followed Feit surrounding the killing but he remained an employee and Feit always denied any involvement.

Zabilski said he was shocked by Feit’s arrest “because John is one of the most kind and caring and truly compassionate people that I’ve ever met. And anyone would say that.”

Among the evidence that pointed to Feit as a suspect over the years: His portable photographic slide viewer was found near Garza’s body. Two fellow priests told authorities Feit confessed to them. And one of them said he saw scratches on Feit soon after Garza’s disappearance.

Also, Feit had been accused of attacking another young woman in a church in a nearby town just weeks before Garza’s death. He eventually pleaded no contest and was fined $500.

Garza’s family members and friends had long pushed authorities to reopen the case, and it became an issue in the 2014 district attorney’s race. Rodriguez had promised that if elected, he would re-examine the case.

Dale Tacheny, a tax adviser in Oklahoma City who had been a priest at a Missouri monastery where Feit had applied to live in 1963, said that Feit had confessed to him that he had murdered a young woman. Tacheny said it wasn’t until years later that he learned that the woman Feit had described was Garza.

Tacheny said he had traveled in recent years to the McAllen area to support Garza’s family in its efforts to get the case reopened.

“For me, the right thing is being done,” Tacheny, 86, said Wednesday in a telephone interview. “I can’t say there is a great deal of satisfaction, but finally something that is right is happening.”