56 injured after highway explodes in Italy [video] - The Horn News 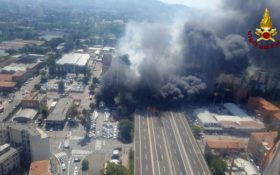 Italian police say at least 56 people have been injured and a bridge has partially collapsed following a major explosion on a highway near the northern city of Bologna.

The Italian news agency ANSA reported the explosion was caused by an accident involving a truck that was transporting flammable substances, which exploded upon impact.

Italian police say a major explosion of a tanker occurred after an accident on a highway near Bologna, Italy, leaving a crater in the elevated highway.

Italian firefighters tweeted that they’ve sent multiple rescue and emergency squads, including one from their urban search and rescue team.

Italian private Sky TG24 reported that some of the injured people had been hit by flying glass when windows in nearby buildings exploded.