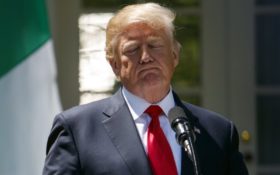 After several presidents broke their promise regarding moving the U.S. Embassy in Israel to Jerusalem, President Donald Trump stepped up to the plate and followed through on America’s 20-year promise on Monday.

Democrats boycotted the ceremony, the latest insult in a string of anti-Semitic controversies that have dogged the party in recent weeks.

Trump’s daughter Ivanka and son-in-law Jared Kushner, along with Treasury Secretary Steve Mnuchin, led the U.S. delegation with a single message: Only Trump had the courage to act on what America has wanted for a long time.

Republicans Senators expressed their regret that no Democrats bothered to show up for the special ceremony.

“That is a sad, sad manifestation. I wish he’d have every member of Congress here,” Texas Senator Ted Cruz said Monday morning in Jerusalem. Cruz was joined by a delegation of four other GOP senators.

“I don’t know why the Democrats will not be here, chose not to come. Every member of Congress had the option before them to come and be here. There was no way on earth we could have inaugurated this embassy without my being here to celebrate it. It’s too important,” said Cruz.

The Horn News reported that Democrat Trayon White, a Washington, D.C. council member, ignited a firestorm on Mar. 16 when he claimed that rich Jews controlled the weather and used it against black voters.

After such a major scandal, is it really appropriate for Democratic leadership to skip out on a ceremony honoring the Israeli and Jewish communities?

Senator Lindsey Graham explained that he personally invited his Democratic colleagues to the event, but none listened to his call.

“I am disappointed that not one Democrat came. What does that say? It’s not for me to tell you what that says. It hurts me. Because I work across the aisle on a regular basis. I think it was a mistake, because there’s too much going on in this region,” explained Graham.

Cruz explained that although support for America’s recognition as Israel’s capital has always been bipartisan, but an invitation to the ceremony was not necessary.

“None of us were invited,” he said. Cruz added that his delegation resulted from him asking his colleagues to attend with him in person.

When reports on Twitter began to surface that Democrats were not invited to the event, Israeli reporter Ariel Kahane shot down the rumors —

I saw some reports that suggest the ceremonies around the opening to the U.S. embassy in Jerusalem were bipartisan and included democrats too. This is not an accurate description – and I am being very diplomatic here. No democrats from the Senate or the house are attending

Not correct. Every member of Congress was invited through the congressional delegation (codel) of congress member Joe Wilson who opened his codel to any member who wanted to come. People involved in the process blame the democratic leadership of congress blocked its members https://t.co/7PKqEE6RPn

“I’m gratified for those you come but I am saddened [by those who didn’t]. Support for Israel shouldn’t be a bipartisan issue,” Cruz said. “And it is worrisome that the fallout of president Obama’s Iran deal is that more and more we’re seeing a divide among partisan lines. It’s not good for Israel, it’s not good for America.”

Former Senator Joe Lieberman spoke to The Times of Israel on the sidelines of the senator’s press conference and stated, “I hope that the Democratic members had [scheduling] conflicts and they had to be somewhere else,” he said.

“I hope that they don’t see this as some kind of pro-Trump rally in Jerusalem. It’s not. Its a pro-US-Israel friendship-partnership-alliance rally. And it’s celebrating the strength of our relationship, which has been always bipartisan.”

Now a Republican president has kept his promise and succeeded, and where are the Democrats?