5 MUST KNOW things about tonight's debate - The Horn News 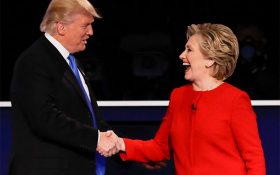 The finale is here – presidential candidates Donald Trump and Hillary Clinton will face off for the late debate time tonight, one final chance to prove themselves to the American people.

It was barely three weeks ago that the first debate took place, but so much has changed. Trump has been hit with a decades-old sexual assault allegations, while Clinton has had to deal with the continuous publishing of staff emails by the infamous WikiLeaks.

He has announced 15-minute segments of six topics: entitlements and debt, immigration, the Supreme Court, the economy, foreign policy, and the fitness of each candidate for the presidency.

Now that the third and final debate is finally here, what should we expect?

In recent days, Trump has warned that the election process may be rigged against him, and is expected to continue these allegations throughout the debate. While he has been criticized by President Obama for “whining,” recent reports back up his complaints.

If Trump is staying informed, he will have the ammo to back up his concerns.

In recent days, Trump has highlighted the controversial request of a senior State Department official that the FBI helped reduce the classification of an email from Clinton’s private server.

It was offered as part of a bargain that would have allowed the FBI to deploy more agents in foreign countries, though it was not immediately clear whether the State Department official or someone at the FBI first raised that prospect.

Campaigning Tuesday in Colorado, Trump called the matter “felony corruption” and worse than the Watergate scandal that brought down President Richard Nixon. It’s safe to assume he won’t let this go unnoticed during the 90-minute debate.

The fitness of candidates has raised concerns in the past of Hillary’s health and Trump’s temperament. Trump and Clinton already have made plain their disdain for each other’s qualifications to occupy the Oval Office, but they can be counted on to look for new ways to attack the other candidate’s fitness for office.

Clinton is sure to draw attention to the recent sexual assault allegations against Trump, which will open the door for him to attack Bill Clinton and the swath of rape accusations against him.

Trump may assert that Hillary attacked Bill’s rape victims, proving that she doesn’t respect women any more than he does. One thing’s for sure, this is guaranteed to get personal.

The first debate attracted a record 84 million viewers and the second 66.5 million.

Whatever the viewership for Round 3, it is sure to be the candidates’ last chance to speak to such a large audience before Election Day on Nov. 8. Watch what messages the candidates pick to drive home as their closing arguments.