5 most dangerous threats to Trump's 2020 hopes - The Horn News 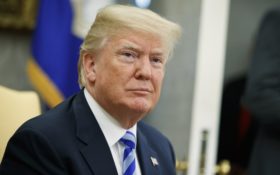 With the mainstream media fabricating stories against him and liberals rabidly mad to oust him, President Donald Trump is being threatened from all sides.

Political opponents — even from his own party– are salivating, hoping to chew him up and spit him out in the next presidential election.

Here are the top challengers to Trump’s re-election:

Bernie lost in the Democratic Primaries to Hillary Clinton, but he still has a strong following of socialist Democrats. In a recent USA Today poll, he came in third-most popular among 2020 challengers to Trump. Former President Barack Obama has been meeting with 2020 hopefuls, including Bernie and numbers two and three on this list.

“Crazy Bernie,” as Trump tagged him, calls himself a “socialist” and “progressive.” And his views are anything but mainstream. George Washington University Professor Samuel Goldman characterizes Sanders’ political philosophy as “Welfarism.” His anti-capitalist initiatives seek to artificially impose “wealth equality” in the U.S –he even supports raising taxes to as much as a 90 percent marginal tax rate.

The Bern is a “global warming” fearmonger who voted against the Keystone Pipeline. “Climate change is one of the great planetary crises that we face,” he cried. He also supports nationalized, government-imposed health care.

He opposes the death penalty, except for babies in the womb being killed at their mother’s whim. He has a 100 percent pro-abortion voting record, even voting against the Partial-Birth Infanticide Ban. He defends U.N. Population Control efforts and tax-paid abortions for our military.

Sanders will be 79 the day of the presidential election. Perhaps his age will account for his, let’s say, “offbeat” quirks, like announcing he’ll seek the Democratic nomination for the Senate, and will then turn it down!

She may have gone down for the count, but do not count the Wicked Witch of the West out. “America’s Angela Merkel,” as Trump calls her, has anger-fueled ambition that knows no bounds.

Just recently “Crooked Hillary” stepped up her self-promotion, bragging repeatedly about her Super PAC’s fight against the President.  Created in mid-2017 — well after she lost the 2016 election — “Onward Together” is very actively raising millions and setting up long-range opposition to Trump. She also had her campaign press secretary head up “Demand Justice” to fund pro-abortion lobbyists against Trump’s pro-life Supreme Court nominees. The New York Post calls “Onward Together”, “a Clinton 2020 campaign vehicle in waiting.”

Despite being a loser, “Lyin’ Hillary” should not be taken lightly. In the recent USA Today poll, she ranked second-most popular among 2020 candidates. She is still called the Democrat’s “Standard Bearer,” and so far no one else has come to the fore to lead the defeated and deflated party.

Hillary is, of course, a liberal’s liberal. There literally isn’t a baby she wouldn’t abort. Her fighting worldwide for abortion-on-demand throughout all nine months of pregnancy for any reason is well known. She promised to impose a litmus test requiring judges to favor abortion. Planned Parenthood, knowing where their bread is buttered, spent over $30 million for her campaign. Clinton’s sworn allegiance to Planned Parenthood is so extreme that despite the abortion giant being caught illegally trafficking in whole aborted babies, Clinton hired Planned Parenthood officials as staffers. She even equates pro-life Republicans with terrorist groups.

If the First Amendment freedom of religion gets in her way, she says, “Religious beliefs … have to be changed.”

Despite her infamous filthy-mouthed rants and her extremist anti-Christian, anti-family, anti-life agenda, Clinton has sought to present herself as a lily-white, devout believer.

She even went so far as to have a daily devotional published in her honor.

Yep. The Dems are so top-light, the current most popular choice of polled voters for 2020 is “Sleepy Joe.” The Hill calls him “the best hope for the Democratic Party in 2020.”

Biden earned the moniker “Crazy Joe” for saying he’d “beat the Hell out of” Trump if they were in school. In an article entitled, “Joe Biden’s Lingering Hands Earn Him Nickname of ‘Creepy Veep,’ The National Post describes him as “the embarrassing uncle of American politics.”

Like the toe-the-line tax-and-spend liberal he is, Biden favors raising taxes, and supports back-breaking ObamaCare. He repeatedly voted for Affirmative Action, and for boosting welfare.

Professing to be a devout Catholic, he betrays his church’s teaching not only on marriage but on the sanctity of innocent human life. He favors tax-paid abortions for our military and voted not to ban human cloning. He led the anti-Robert Bork campaign against the conservative justice. His votes opposed both vouchers for school choice and voluntary school prayer.

Elizabeth “Pocahontas” Warren, the junior senator from Massachusetts, earned a name for herself among radicals and progressives and came in fourth in USA Today’s poll — and second in a Washington Post poll for 2020 hopefuls.

As a female candidate she appeals to misandrists and other disillusioned former supporters of Hillary Clinton. She appeals to the far Left in terms of open, unvetted immigration and border insecurity — even going so far as to call for the elimination of Immigration and Customs Enforcement (ICE) altogether.

Warren gained infamy among critics when it was leaked that she claimed American Indian ancestry on her application for a $430,000 teaching job at Harvard Law School. The New England Historic Genealogical Society stated there is no evidence to back up her claims, which garnered her not only her job but honor and recognition as a “minority.” She has no evidence to back up her claims, and even rejected DNA testing to prove her tall tale. The New Boston Post’s Matt McDonald concluded, “Warren is not only far-left; she appropriated other people’s ethnic identity to get what she wanted.”

Hence, Warren received the moniker of “Pocahontas” from Trump. Since the controversy, critics have found a vast number of beyond-political-rhetoric falsehoods, misrepresented figures, and hypocrisies in Warren’s speeches.

Liar or not, the woman is fanatically pro-abortion. Like Clinton, she’s an extremist when it comes to taxpayer funding of Planned Parenthood and other abortuaries. She wants abortion-on-demand throughout all nine months of pregnancy, well after medical science has proven the living human inside feels excruciating pain. She adheres to the pro-abortion litmus test for America’s judges. She fights for tax-payer funded abortions, opposes all pro-life limits on abortion, and wants churches to provide abortifacient contraception. While Planned Parenthood was exposed for illegally trafficking in whole aborted babies to buy staffers Lamborghinis, Warren defended the nation’s largest killer of children and maintained the lie that undercover videos were deceptively edited.

It’s safe to say that even in the face of indisputably proven facts, Warren lies.

With the possible exception of Joe Biden, the Democrat lineup seems to be vying for who’s the furthest Left – and Warren literally endorsed socialist Bernie Sanders’ “Medicare for all” idea.

Perhaps the greatest threat to Trump in 2020 comes from members of his own party.  “Never Trumpers” and those who hate The Donald’s shoot-from-the-hip honesty are eager to see him lose — even if it means dividing the Republican Party. During his presidential campaign, Trump lambasted his competition.

Now, some of them want political payback.

Several GOPs are setting themselves up as Republican alternatives to Trump. Arizona Sen. Jeff Flake whines on the Senate floor about the “coarseness” of the president’s rhetoric –and announced he would not seek re-election in 2018. Tennessee Sen. Bob Corker also won’t seek re-election, and has called Trump unstable and incompetent.  Nebraska Sen. Ben Sasse attacked Trump on the president’s home turf of Twitter, admonishing him that his ridiculing comments are “not normal” and are “beneath the dignity of your office.” New Mexico Gov. Susana Martinez refused to support the President over his crude private comments, calling them “offensive rhetoric that raises serious questions about this fitness to be president.”

Then there’s the already-rans, like businesswoman Carly Fiorina, former Gov. Mitt Romney, and others. No doubt about it, plenty of people want a second chance at first prize.

But of all the possible Republican challengers, one viable contender has already thrown his hat in the 2020 ring. Ohio Governor John Kasich has already implied he’ll break ranks and primary his party’s president. A fiscally conservative moderate, Kasich has wide appeal — especially to those who cringe at Trump’s overly blunt, in-your-face, “America First” fearlessness.

However, Kasich — a career long pro-life politician — crushed the hearts of his conservative constituents during the 2016 campaign by backing off his commitment to the sanctity of innocent human life. He took the compromising side of a nationwide pro-life debate and actually vetoed Ohio legislation that would have saved lives, saying conservatives should take an “incremental” approach.

That devastating betrayal, and the perception that Kasich is too establishment, make him a non-starter to true conservatives.

So what does Trump need to do to overcome these challengers? Be himself, which he is very good at. But with one word of caution: Be the best of himself. Show America the best of Donald Trump.

The never-sell-out, can’t-be-bought, anti-establishment conservative whose decisions are made by principle, not political pressure. And as the mainstream media inevitably drums up more and more fake news slander, keep fighting the good fight.

Shocking new theory about the Garden of Eden [sponsored]

Much more importantly, what do true conservatives need to do for our president to win?

We need to SPEAK OUT, speak openly, and speak often, unintimidated by pressure from the Left.