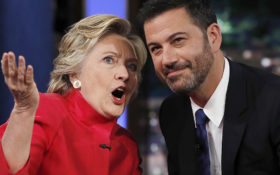 Jimmy Kimmel might be the darling of the left this year for taking a stand against President Donald Trump and working to save Obamacare.

But he’s not exactly a model liberal.

In fact, Kimmel has been an equal opportunity offender over the years… and he’s even stepped on the toes of the liberal elites that adore him so much.

Here’s a look back at five late-night jokes that were ACTUALLY funny.

Kimmel has at least one thing common with many conservatives: He’s sick to death of political correctness.

Last year for Thanksgiving, he skewered everything from cultural appropriation to gender labels.

And to top it off, he had adorable children act it all out:

He didn’t stop with Thanksgiving.

Mention Columbus Day to the left, and you’d better duck… or at least prepare for a level 10 freak-out.

Despite the fact that the 1492 discovery of the New World forever altered the course of the history of the planet… and despite the fact that we (and the rest of the free world) owe much of what we have today to that journey… liberals blame Columbus for just about anything bad that came after, even hundreds of years after his death.

So Kimmel took a few shots at trying to explain Christopher Columbus in a politically correct way:

Before he “saved” Obamacare, Kimmel mocked it – and pointed out exactly what was wrong with it: the unfair imbalance between those who are paying into the system and those who are taking out of it.

Here’s a mock ad he did that ripped into the core of Obamacare:

Kimmel and his longtime friend Adam Carolla had an entire show that flies in the face of PC liberal principles.

Even the name – “The Man Show” – is something that would get him kicked out of the left.

The show routinely objectified women, and although it often had a sharp eye toward satire, it would never get on the air today.

In fact, this would almost certainly be considered even more offensive than ever in the current climate:

Stein may have even given Kimmel his big break in an episode where they switched places, with Kimmel acting as host and Stein his sidekick:

This wasn’t just a match of convenience made for TV.

Kimmel’s liberal viewers — the ones who have over the past year dropped friendships and even relatives over politics — might be pained to discover that the two remain close friends.

When Kimmel’s Obamacare speech went viral, Stein defended him on Fox News despite disagreeing on the issue.

“I do not watch any other late-night shows,” Stein said on Fox News. “I only watch Kimmel, and I watch him every night, and almost every time I watch him, I send him texts or emails, rather, about it. He writes right back to me. He’s an incredibly good correspondent.”

“I’ve had 15 email interactions with Ben Stein over the last 96 hours,” he told The New York Times in an October interview. “It teaches me and it teaches them how to have a real conversation without just declaring someone the enemy and retreating to your corner.”

That’s a lesson many of Kimmel’s viewers should learn.