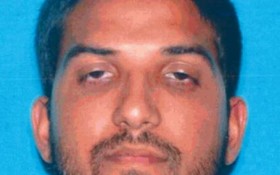 With a young wife, infant daughter and government job, Syed Rizwan Farook appeared to have achieved the American dream.

But after he and his wife Tashfeen Malik unleashed a terror attack that killed 14 people at a San Bernardino, CA social services facility Wednesday, disturbing details continue to emerge about the couple.

Here are five of the latest pieces of information that have recently come to light.

U.S. intelligence officials said Farook had been in contact with known Islamic extremists on social media. Officials spoke on condition of anonymity because they were not authorized to discuss the investigation publicly.

In fact, during the rampage Malik took time to make a Facebook post pledging her allegiance to the Islamic State leader, Abu Bakr al-Baghdadi, multiple sources are reporting.

Despite this, Farook was not under scrutiny by local or federal law enforcement before the attacks.

Authorities say that the couple meticulously deleted their social media accounts in preparation for the attacks. All they missed was a profile on a matchmaking website for South Asians that matched Farook’s name, California hometown, county health job and Muslim faith and said his interests included target shooting in his backyard.

#2 A huge arsenal and wild trips… on a limited budget

The pair had more than 1,600 bullets on them when they were killed. Police said they also had 12 pipe bombs, tools to make more explosives, and more than 3,000 rounds of ammunition at home. They were equipped with body armor, tactical gear, two AR-15s, two handguns, and more.

Farook made a little less than $53,000 a year as a county health inspector, and was supporting a family of three in one of the most expensive areas of the country. Now some experts are asking how he afforded such an expensive weapons cache and a recent trip to Saudi Arabia.

#3 The terror attack may have been recorded

Police Lt. Mike Madden, one of the first officers to reach the room at the social services center, where Farook’s colleagues from San Bernardino County’s public health department had gathered, said the carnage was “unspeakable.”

But it seems likely that Farook and Malik may have planned to share the video of the slaughter online.

A friend of a man killed in the rampage said Farook had a heated conversation about Islam two weeks before the attack.

Kuuleme Stephens said she happened to call Nicholas Thalasinos while her friend was talking with Farook at work. She said Thalasinos, a Messianic Jew who was passionately pro-Israel, told her Farook “doesn’t agree that Islam is not a peaceful religion.” Stephens said Farook replied that Americans don’t understand Islam.

#5 A dozen bombs… and more to come

Farook and his wife were avid bomb makers.

When their home was raided, police said they found 12 pipe bombs and tools to make more explosives. During the police chase, Farook is alleged to have thrown a bomb at the pursuing police; the homemade explosive turned out to be a dud.

At the scene of the slaughter, Farook and Malik had also left a nasty surprise – three pipe bombs strung together with a remote detonator attached. Police were able to successfully destroy the device with a controlled explosion.