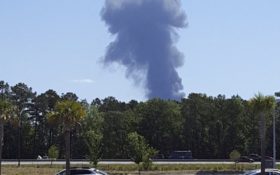 Chatham County Deputy Coroner Tiffany Williams says police tell her two people have been killed in the crash. Williams said she didn’t have any other details on the deaths.

The plane crashed at the intersection of two roads, the Chatham County Emergency Management Agency said in a tweet.

Scene from plane crash. Military C130 down on 21 and Gulfstream. pic.twitter.com/BOnVit80ln

A photo tweeted by the Savannah Professional Firefighters Association shows the tail end of a plane and a field of flames and black smoke as an ambulance stands nearby.