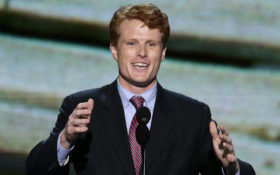 Standing on the podium with what looked like drool running down his face, Joe spoke from Fall River, Massachusetts and added to the heated us-versus-them battle.

Joe characterized America as a “fractured” country and offered an “answer” from Democrats to repair the “chaos.”

Lie #1 — Russia is “knee-deep” in our Democracy

The response to Russia meddling into the 2016 election has been obnoxious. Democrats repeatedly claim that Russians have only meddled enough to boost the Republican party.

The truth of the matter is — Russians were not bias, they meddled into both parties!

Not only did Russia buy a Black Lives Matter advertisement on Facebook during the presidential campaign, WiKiLeaks also published thousands of emails hacked from the DNC server.

The proof is in the pudding. Both parties were targets of Russian meddling.

“Bullets tearing through our classrooms, concerts, and congregations. Targeting our safest, sacred places,” Kennedy said. “And that nagging, sinking feeling, no matter your political beliefs: This is not right. This is not who we are.”

During Trump’s first year in office, he has pushed efforts to crack down on the crime wave.

In December of 2017, data showed that the overall crime rate had fallen 2.7 percent compared with the previous year. The violent crime rate fell by 1.1 percent.

Someone should show liberals these statistics.

“We see an economy that makes stocks soar, investor portfolios bulge and corporate profits climb but fails to give workers their fair share of the reward,” the 37-year-old congressman added.

Behind this major lie, lays the truth — dozens of companies gave their workers major bonuses and incentives after Trump’s tax reform bill passed.

Alaska Airlines, Apple, AT&T, Bank of America, Comcast, Home Depot, Starbucks, Royal Caribbean, Walt Disney and many, many more have offered their thousands of employees bonuses, and some even increased their workers’ hourly wages.

But, let’s not forget, to Democrats like House Minority Leader Nancy Pelosi, these bonuses and wage increases are just “crumbs”. It’s a shame that we cannot all have a net worth of $29 million, Ms. Pelosi.

Many Democrats have appreciated that Joe is living up to his family name. Some have even suggested he is another magazine liberal like Hillary Clinton.

Matt Gorman, a spokesman for the House Republicans’ political arm said, “Democrats using the multi-millionaire scion of a political dynasty as the face of their party shows they’ve learned absolutely nothing.”

Joe held his speech in the autoshop of a high school in Massachusetts. No one is falling for his act — this man has never stepped foot into a public high school before. He grew up going to fancy private schools, living in a mansion. He cannot begin to understand the struggles that some Americans go through.

This speech should have been held at the Kennedy Compound — let Americans really see how liberals live in their wealth.

Lie #5 — Democrats are the only party fighting for ‘Dreamers’

Joe addressed the ‘Dreamers’ during his speech and even spoke to them in Spanish.

“And to all the Dreamers watching tonight, let me be clear: You are a part of our story. We will fight for you. We will not walk away,” he said.

Apparently this liberal has forgotten, Trump has also put up a fight for those illegal immigrants.

During his address, Trump noted that “those who meet education and work requirements, and show good moral character, will be able to become full citizens of the United States.”

I guess the Democrats must have missed that part of his speech.

The obvious truth is this, Democrats are anti-Trump, and that is what is most important to them.