The 5 most moving Memorial Day celebrations - The Horn News 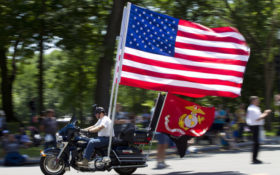 Every year on the last Monday of May, Americans take time to honor the men and women who made the ultimate sacrifice in the name of our nation’s freedom.

These soldiers that gave their lives deserve our never ending gratitude, but on this one day, Americans everywhere take the time to reflect on their courage and generosity.

Originally known as Decoration Day, it originated following the Civil War in which an unprecedented amount of American lives were lost, and national cemeteries were established. In their honor, Americans would visit various cemeteries in the spring, decorating graves with flowers and joining together in prayer.

Memorial Day became an official federal holiday in 1971, and today we celebrate with parades, cemetery visits, and barbecues.

Here’s a look at how Americans our honoring our heroes from coast to coast for Memorial Day 2017:

Taking the crown for the nation’s largest Memorial Day celebration, The American Veterans Center’s National Memorial Day Parade is a beautiful celebration of the brave soldiers who gave their lives.  The parade, celebrating its 13th year, takes place along Constitution Avenue from 2-4 p.m. and is expected to draw hundreds of thousands of spectators to the National Mall. The event will be televised live on local stations nationwide.

The city of Chicago celebrates Memorial Day a few days early, with a parade through the city on Saturday May 27th.  Hosted by the City of Chicago and the Department of Cultural Affairs and Special Events, the parade kicks off with a wreath laying ceremony at 11 a.m., followed by the parade at noon led by United States Marine Corps, Lieutenant General Robert S. Walsh, Marine Corps Combat Development Command and Deputy Commandant, Combat Development and Integration. Walsh will be joined by Chicago Mayor Rahm Emmanuel and service members, veterans and Gold Star families for the Wreath Laying Ceremony.

The Dallas-Fort Worth VA National Cemetery offers a beautiful Memorial Day Service honoring deceased servicemen and women. The service takes place at 11 a.m. on Memorial Day and is free to the public. The cemetery was established in 200 and is the sixth National Cemetery in Texas, created for the nearly 1.5 million veterans that live in Texas.

This is a must see for all patriots in the North East. The awe-inspiring display of over 37,000 American flags is a beautiful reminder of the symbol of freedom our soldiers fought for. The flags appear in front of the Soldiers and Sailors Monument on Boston Common and is a representation of Massachusetts service members whom have died in the line of duty since the Revolutionary War. The flags will be in place from Wednesday through Monday in honor of the men and women who served our nation so courageously.

Wherever you are for Memorial Day, remember to observe a nationwide minute of silence at 3 p.m. recognizing the deceased service members and the ultimate sacrifice they made for our freedom.

Thank a veteran, pray for those overseas, and most of all appreciate the incredible courage our our nation’s heroes.