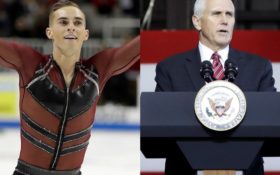 Ice skater Adam Rippon doesn’t want his month-long dispute with Vice President Mike Pence to overshadow his long-awaited Olympic performance — or those of the rest of the American team.

One of two openly gay U.S. athletes at the Pyeongchang Games, Rippon has attacked the White House last month for choosing Pence to lead its official delegation for Friday’s opening ceremony.

Pence has been considered by liberals to be an opponent of the LGBT community after the conservative he signed the Religious Freedom Restoration Act while serving as governor of Indiana.

The media told voters that the legislation encourages discrimination against gay people.

Pence had something to say, though, that shocked the mainstream media.

Pence, who arrived in Seoul on Thursday, brought with him a message of unity. He tweeted to Rippon: “I want you to know we are FOR YOU. Don’t let fake news distract you. I am proud of you and ALL OF OUR GREAT athletes and my only hope for you and all of #TeamUSA is to bring home the gold. Go get ’em!”

Headed to the Olympics to cheer on #TeamUSA. One reporter trying to distort 18 yr old nonstory to sow seeds of division. We won’t let that happen! #FAKENEWS. Our athletes are the best in the world and we are for ALL of them! #TEAMUSA

What Rippon jokingly referred to as “brouhaha” began with an interview with USA Today last month in which he called Pence, among other things, a hypocrite for espousing Christian virtues on America.

Pence’s press secretary, Alyssa Farah, was quick to respond with a sharp rebuke. Farah said in a statement that some of Rippon’s statements were “totally false” and had “no basis in fact,” including an assertion he made that Pence was a proponent of gay conversion therapy.

Their spat took another odd twist this week when USA Today, citing unnamed sources, reported in a controversial story that Pence tried to speak with Rippon in mid-January but the skater turned down his overtures.

Jarrod Agen, the vice president’s communications director, called the report “false” and said Pence’s office never reached out to Rippon. Agen called for the report to be corrected.

Sponsored: The 4 common household substances that might be making you fat and tired

Rippon, a 28-year-old American, will make his debut Monday in the free skate portion of the team event for the medal-contending U.S. squad, then he’ll compete later this month with teammates Nathan Chen and Vincent Zhou in the individual competition.

“I mean, after the competition I’ll have an open conversation [with Pence],” Rippon said, “but the opening ceremony is tomorrow. I’m really focused on the competition. I’ve waited 28 years to get here. I’m trying to stay focused. It’s my opportunity show the world what I’ve got and represent my country.”

The Olympics games are a time for Team USA to join together as athletes and unite to bring home the gold.

It is a time for Americans to put aside race, gender, or sexual identity and support our nation. The Vice President is making it clear that he supports all members of Team USA — even the athletes who disagree with him politically.