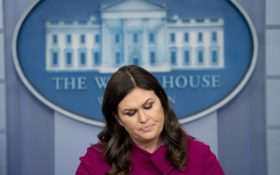 Republicans in the House Intelligence Committee voted to release a classified memo that shows improper use of surveillance by the FBI and the Justice Department in the Russia investigation.

The four-page memo has become a political flashpoint, with President Donald Trump and many Republicans pushing for its release and suggesting that some in the Justice Department and FBI have conspired against the president.

Republicans have said the memo reveals grave concerns about abuses of the government surveillance powers in the Russia investigation. Democrats have called it a selectively edited group of GOP talking points that attempt to distract from the committee’s own investigation into Russian meddling.

The vote Monday evening to release the memo is an unprecedented move by the committee, which typically goes out of its way to protect classified information in the interest of protecting intelligence sources and methods.

The memo was delivered by courier to the White House and Trump now has five days to object to its release by the committee.

GOP lawmakers have described the memo as “shocking,” “troubling,” and “alarming.”

Republicans said they are confident the release won’t harm national security. They also said they would not release the underlying intelligence that informed the memo.

While Trump’s White House signaled he would likely support the Republican memo’s release, his Justice Department has voiced concerns.

In a letter to Nunes last week, Justice officials said releasing the classified memo could be “extraordinarily reckless” and asked to review it. Assistant Attorney General Stephen Boyd suggested that releasing classified information could damage the United States’ relationship with other countries with which it shares intelligence.

After those complaints, FBI Director Christopher Wray reviewed the memo over the weekend.

Rep. Trey Gowdy, R-S.C., who was with Wray when he reviewed the memo, said the FBI director did not raise any national security concerns with him. Gowdy said the memo doesn’t reveal any intelligence methods but it does reveal “one source.”

White House chief of staff John Kelly and other White House officials contacted Justice Department officials in the past week to convey the president’s displeasure with the department’s leadership on the issue specifically, the official said. In a series of calls, Kelly urged the Justice officials to do more within the bounds of the law to get the memo out, the official said.

It is still unclear exactly when or how the memo will be released.

“We want full transparency,” White House press secretary Sarah Huckabee Sanders said Monday. “That’s what we have said all along.”

Sanders added that the White House is letting process fully play out before they weigh in.

Some political observers are calling for Trump to read the memo at the State of the Union on Tuesday night when millions of Americans will be tuning in to hear the president live.

If the president does read the memo at that time, there will be no opportunity for the “fake news” media to put a liberal spin on it, backers say — he would be able to address the nation directly with unedited facts.

Conaway said the memo could be released within the five-day window if Trump signals his approval for releasing it.

Some Republican senators have said they don’t want to release the memo, and Democrats have pushed back on Republican criticism of the FBI, saying it is an attempt to discredit Mueller’s investigation.

Late Monday, House Democratic leader Nancy Pelosi blamed House Speaker Paul Ryan, who oversees the intelligence panel and has deferred to Nunes, whom she called a “stooge.” She said on CNN that Ryan is allowing the release of a “false memo based on a false premise.”

In response to the release, Democrats on the panel have put together their own memo.

On Monday, the committee voted to make the Democratic memo available to all House members — but not the public. Leave it to the Democrats to play childish games.

The status of the memo release remains unclear, but we urge Americans tune in to the State of the Union address in hopes of its release.