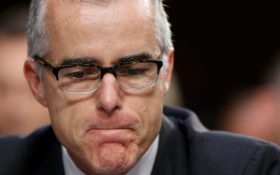 FBI Deputy Director Andrew McCabe, who led the bureau for months last year following the firing of James Comey, is leaving his position Monday ahead of a previously planned retirement this spring, it was announced Monday.

Fox News reports that McCabe was “removed” from his position after months of conflict-of-interest complaints from Republicans.

McCabe had been widely expected to retire upon his eligibility date, but his departure from the FBI’s No. 2 slot is effective Monday, according to the people, who spoke on condition of anonymity to discuss an internal personnel move. One of the people said he was going on “terminal leave.”

In other words, he was fired.

McCabe has been repeatedly attacked by President Donald Trump since the fall of 2016, when it was revealed that his wife had accepted campaign contributions from the political action committee of Virginia Gov. Terry McAuliffe, a close Clinton family ally, during a failed state Senate run.

He will stay on the FBI payroll until he is able to retire with full benefits in mid-March.