Trump just dropped a bombshell on this rapper - The Horn News 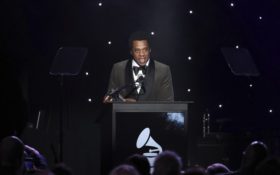 During an interview on CNN’s debut episode of “The Van Jones Show” on Saturday, Jay-Z said that Trump’s alleged remarks about African countries was worsening race relations in America.

Trump took to Twitter to lash back out at the rapper for not recognizing that his policies have made the black unemployment rate the lowest rate ever recorded.

Somebody please inform Jay-Z that because of my policies, Black Unemployment has just been reported to be at the LOWEST RATE EVER RECORDED!

“Somebody please inform Jay-Z that because of my policies, Black Unemployment has been reported to be at the LOWEST RATE EVER RECORDED!” Trump tweeted.

The president’s tweet Sunday was in response to the rapper saying that Trump’s alleged comments about third-world countries were “disappointing” and “hurtful.”

Jay-Z said during his CNN interview that lower unemployment among blacks doesn’t make up for the president’s attitude. Jay-Z says, “It’s not about money at the end of the day,” and it “doesn’t equate to happiness.”

Of course, Jay Z is a multimillionare that once bragged about “What’s 50 grand to a motherf****er like me?”

Critics say this is just another example of a clueless liberal elitiest with millions of dollars to blow and a mouth that runs wild.