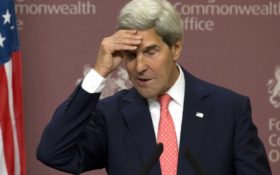 Former Secretary of State John Kerry has reportedly tried to meddle into peace talks with the Middle East — and his reported actions are disturbing.

Kerry reportedly has told a close associate of Palestinian Authority President Mahmoud Abbas to order the foreign leader not to negotiate with President Donald Trump’s demands.

After a massive failure in the 2004 Democratic presidential nominee, Kerry reportedly is eyeing a 2020 presidential run.

Israeli news outlet Maariv reported that Kerry and Abbas’ associate Hussein Agha had a meeting in London where Kerry shared a secret message for Abbas.

“[Abbas] should stay strong in his spirit and play for time — that he should not break down and not capitulate to Trump’s demands,” Kerry told Agha, according to Maariv.

Kerry went a step further to tell Agha that Trump will be removed from office shortly, suggesting he would be out within the next year.

According to the report, Kerry used negative and disturbing terms when referring to the president. He even offered a hand in creating a new peace initiative favorable to the Palestinians.

The report states that Kerry asked Abbas not to attack the U.S., but rather to focus on attacking the president himself.

An ally of Trump’s has spoken out on this incident, and gave a shocking response.

It is unclear whether Abbas plans to take any of Kerry’s alleged advice.