Despite being confined to a wheelchair, Bob Dole just WOWED everyone - The Horn News 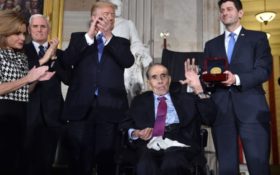 Dole was honored at the U.S. Capitol on Wednesday by receiving the Congressional Gold Medal from President Donald Trump and Vice President Mike Pence.

Dole who is 94-years-old, is confined to a wheel chair, but that did not stop him from standing for the national anthem.

As a veteran of World War II, Dole played a key component in creating the World War II Veterans Memorial.

He unfortunately is no longer able to walk, but as soon as he saw the color guard walking into the ceremony carrying the American flag and the flags of the Armed Forces, Dole waved his arm around searching for an aide to help him stand.

A great American. RT @RealSaavedra: 94-year-old Bob Dole, who is confined to a wheelchair, put the @NFL to shame today when he stood for the national anthem. #CongressionalGoldMedal pic.twitter.com/O4bvQHaFGL

In recent months, NFL players have began to take a knee during the national anthem, which has become a controversial act.

In a world with disrespectful millionaires like the football players, people should be more like Mr. Dole.

Americans should appreciate this man for being such a great example to us all.