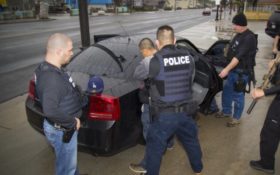 Good bye, liberal sanctuary city laws! The U.S. Immigration and Customs Enforcement is planning a major sweep of the the San Francisco area — and they’re bringing the hammer on illegal immigrants.

This sweep is going to be the largest of its kind since President Donald Trump first took office a year ago.

The operation plans to target more than 1,500 undocumented immigrants in the Bay Area and other Northern California areas.

The San Francisco Chronicle first reported that this sweep will send a message that the Trump administration will be enforcing the immigration policy in the Sanctuary State.

Although officials from ICE have declined to comment on the report, loud mouth liberal California Senator Diane Feinstein has made sure to get her opinions out into the world about this operation.

She accused the Trump administration of using this operation to make a political point, not just to enforce federal law.

The State of California has been clashing with the Trump administration because the state has gotten in the way of Trump enforcing immigration laws.

In October, California Governor Jerry Brown signed into law a bill that limits local police from cooperating with federal authorities.

A stipulation of this new law is that is bars federal authorities from detaining illegal immigrants who have been placed in local jails.

Thomas Homan, the acting ICE Director, has stated that this new law “threatens public safety” and that the federal government will be forced to conduct massive arrests in the communities that hold these liberal policies.

The sweep will be targeting individuals that have been served deportation documents and those with criminal backgrounds.

Liberals better watch out, the federal government is stepping in to enforce the law… whether they like it or not.