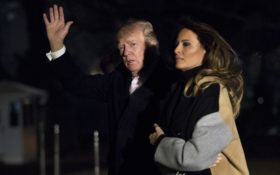 President Donald Trump took to Twitter on Monday to fight back against Democratic lawmaker attacked — and in the process, slapped his latest opponent with a new nickname

Trump said Sen. Dick “Dicky” Durbin misrepresented what he had said about some third-world nations and, in the process, undermined the trust needed to make a deal on DACA.

On a day of remembrance for Rev. Martin Luther King Jr., Trump dedicated his weekly address to King’s memory, saying King’s dream and America’s are the same: “A world where people are judged by who they are, not how they look or where they come from.”

Trump then lashed out at the Democratic senator on Twitter, who said Trump called some countries “sh*tholes” on several occasions.

“Senator Dicky Durbin totally misrepresented what was said at the DACA meeting,” Trump tweeted. “Deals can’t get made when there is no trust! Durbin blew DACA and is hurting our Military.”

Senator Dicky Durbin totally misrepresented what was said at the DACA meeting. Deals can’t get made when there is no trust! Durbin blew DACA and is hurting our Military.

He was referring to the Deferred Action for Childhood Arrivals program, which protects young people who came to the U.S. illegally as children. Members of Congress from both parties are trying to strike a deal that Trump would support to extend that protection.

Republican Sen. Lindsey Graham of South Carolina, one of the six senators in the meeting with Trump on Thursday, supported Durbin’s account.

As well, Durbin and people who were briefed on the conversation but were not authorized to describe it publicly said Trump also questioned the need to admit more Haitians.

Republican Sens. David Perdue of Georgia and Tom Cotton of Arkansas, who also attended, deny he said it at all.

Trump has not clarified to aides what he said.

Afterward Trump insisted in a tweet that he “never said anything derogatory about Haitians other than Haiti is, obviously, a very poor and troubled country. Never said ‘take them out.’ Made up by Dems.” Trump wrote, “I have a wonderful relationship with Haitians.

Never said anything derogatory about Haitians other than Haiti is, obviously, a very poor and troubled country. Never said “take them out.” Made up by Dems. I have a wonderful relationship with Haitians. Probably should record future meetings – unfortunately, no trust!

The contentious comments came as Durbin was presenting details of a compromise immigration plan that had money for a first installment of the president’s long-sought border wall.

Trump allegedly took issue with the idea that people who’d fled to the U.S. after disasters hit their counties decades ago, in places such as El Salvador, Guatemala and Haiti, would be allowed to stay indefinitely, according to the people briefed on the conversation.

The mainstream media outrage over Trump’s alleged comments threatened to upend delicate negotiations over resolving the status of the hundreds of thousands of illegal immigrants who were brought to the country as children.

Trump announced last year that he will end the Obama-era program unless lawmakers come up with a solution by March.