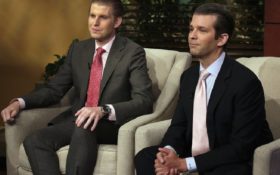 YouTube personality Mike Dice interviewed leftists on their feelings toward the president’s sons killing these ‘endangered’ animals… and their reactions are priceless.

Democrats hate the Trump family so much that they easily fell for the story — that is completely fake.

Dinosaurs have been extinct for millions of years, right?

Well, somebody needs to inform these ignorant fools. Take a look —

“You might have seen the Trump kids are big hunters. They go on hunting trips just for fun and kill all these poor animals. So now I’m just getting people’s reactions to Donald Trump’s kids killing Triceratops in Africa on a hunting expedition,” explained Dice.

“I think they’re just getting away with a lot just for the simple fact that they’re Donald Trump’s children,” said the first beachgoer.

It should be illegal to be this ignorant!

“Now Donald Trump’s kids, Eric and Donald Jr. have killed a sabre tooth tiger. Just for fun, you may have seen the photos going around social media,” said Dice.

“I don’t think it’s the right move. The saber-tooth tiger is a beautiful animal, and I’m sure it’s an endangered species. If you want to go hunt something and kill something, why don’t you go fish or something?” said another beachgoer.

What this Einstein does not know it that these ‘beautiful’ animals have been extinct for millions of years.

These liberals should do a little research next time before humiliating themselves on camera.