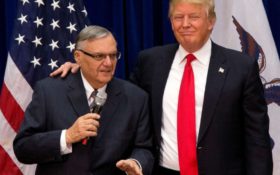 Former Arizona Sheriff Joe Arpaio says he plans to run for a U.S. Senate seat now held by Republican Jeff Flake. His 24 years as sheriff of metro Phoenix were defined by a series of tough-on-crime tactics and legal problems that cost the area millions of dollars.

He opened the Tent City jail complex in 1993 to ease overcrowding. But it was criticized for serving as a media promotion tool for Arpaio and contributing to a culture of cruelty within the jails.

He also said his office started dyeing the jail-issued underwear in the 1990s as a way to discourage inmates from taking home the undergarments after they were released from custody. Critics say the change in underwear colors was intended to humiliate men serving time.

Arpaio spent nine of his 24 years in office enforcing federal immigration law. Unlike other local police leaders who left it to U.S. authorities, Arpaio made hundreds of arrests in traffic patrols that sought out immigrants and business raids in which his officers targeted immigrants who used fraudulent IDs to get jobs.

His refusal to stop traffic patrols that targeted immigrants ultimately led to a criminal case that contributed significantly to his re-election loss late last year.

Arpaio was later convicted of misdemeanor contempt of court for ignoring a judge’s order to stop his immigration patrols but pardoned by President Donald Trump, an ally of the former lawman.

A poll conducted Tuesday by ABC15, the same day he announced his bid to run, showed the former sheriff with 29% of the vote, a statistical tie with first place candidate Martha McSally at 31%.

Arpaio would take an even larger jump if we consider hypothetical endorsements that candidates may receive.

A Trump endorsement for Apraio would give him a bump up to 35%.

Let the world know if you would like to see Arpaio win the Senate race! Vote below.

Will you vote for Joe Arpaio in the U.S. Arizona Senate race?