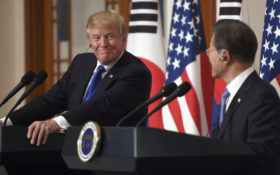 South Korean President Moon Jae-in publicly thanked President Donald Trump for his help bringing the two Koreas together for their first sit down talk in years.

In return, Trump explained that he is open to having talks with North Korea at the appropriate time.

Liberal lawmakers are not happy with Jae-in for crediting Trump for a playing a big role in the two Koreas making amends — but the facts can’t be denied. Trump’s get-tough approach to Kim Jong Un is working.

For the first time since December of 2015, representatives from South and North Korea met in the border village of Panmunjom to resolve disputes.

On Wednesday, Jae-in told reporters that Trump deserves “big credit” for talks between North and South Korea. ““I think the contribution of President Trump was very big in accomplishing inter-Korean talks. I want to show my gratitude,” he continued.

Unfortunately for leftists, Jae-in’s praise for Trump signaled a united front between the two leaders. It showed Jae-in’s agreement with Trump’s assessment as to why the talks happened.

Trump has repeatedly claimed that talks between the two countries would be beneficial, and Jae-in appears to agree.

With all of the failed “experts” weighing in, does anybody really believe that talks and dialogue would be going on between North and South Korea right now if I wasn’t firm, strong and willing to commit our total “might” against the North. Fools, but talks are a good thing!

Trump made a big step to signal a possible sit down with North Korea as well, in stating “at the appropriate time, under the right circumstances,” it can happen.

Overall, the general consensus is that Trump’s overwhelming pressure on North Korea played a major role in bringing the country to the table.

With Trump as our president, anything can happen!