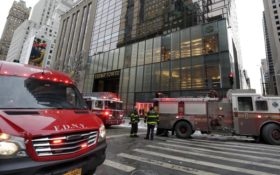 New York City fire officials say a fire at Trump Tower injured two people and caused smoke to billow from the roof — but is under control.

The Fire Department of New York says the fire started around 7 a.m. Monday at the building that contains President Donald Trump’s home and business offices.

WATCH: Firefighters responded to a fire on the roof of Trump Tower in New York City https://t.co/LnII0XquRZ pic.twitter.com/yyJLEPC50K

Fire officials say a civilian was treated for serious injuries and a firefighter was treated for minor injuries. It took about an hour to put out the fire on Fifth Avenue in Manhattan, which started in the roof’s heating and air conditioning units.

There was a small electrical fire in a cooling tower on the roof of Trump Tower. The New York Fire Department was here within minutes and did an incredible job. The men and women of the #FDNY are true heroes and deserve our most sincere thanks and praise! https://t.co/xuTmq1GBbj

The president’s son Eric tweeted his thanks to firefighters for doing “an incredible job.”