Liberals MORTIFIED by this anti-Hillary video (by... WHO!?) - The Horn News 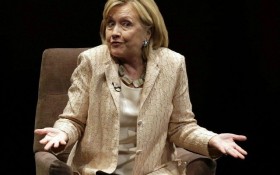 Hillary Clinton has refused to go away… and even the media is turning on her. Employees at Vanity Fair magazine made a few lighthearted suggestions to “help” Hillary this New Year’s Eve… and their video has left liberals furious.

The rumors are swirling that Hillary is planning on playing a role in the 2018 midterm elections… and now she’s being openly mocked.

Check out Vanity Fair’s six resolutions for Hillary to take up during the new year.

Of course, Hillary’s supporters aren’t used to being mocked by the media… and these snowflakes are spitting mad.

In fact, some claimed it was sexist to tell a women what she should do with her time. But Americans that have their heads screwed on properly cannot agree more — get a life, Hillary!

In 2018, liberals need to put on their big boy pants and say goodbye to the beloved “Killary” and say hello to the real world, where President Donald Trump is the leader of the country.

Cheers to the new year!