Trump DROPS THE HAMMER on the U.N. - The Horn News 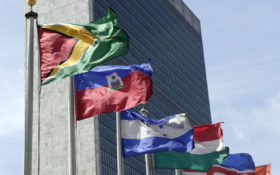 The United Nations’ budget is set to shrink by over $285 million next yea r– a 5 percent cut that President Donald Trump says his administration negotiated.

Millions of dollars ripped from the hands of corrupt globalists… and put back into the pockets of American taxpayers.

In a statement Sunday, U.S. Ambassador Nikki Haley faulted the U.N. for “inefficiency and overspending” and said Trump’s administration won’t let “the generosity of the American people be taken advantage of.”

The U.N. General Assembly voted Sunday to approve the nearly $5.4 billion regular operating budget for 2018-2019. The Secretary-General’s office says the new budget include cuts to most departments and offices.

The regular budget pays for many U.N. activities, but not peacekeeping or some humanitarian appeals, for example.

The U.S. is the largest contributor, paying about 25 percent of the regular budget.

Since his election, Trump has promised to cut U.S. contributions to the world body, which critics say call a spending waste and an unnecessary burden to American taxpayers.