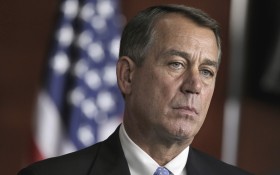 Lame duck House Speaker John Boehner turned his back on hardline conservatives and caved to a budget deal with the White House just before midnight Monday.

The deal allows America to go even deeper into debt, suspending the current $18.1 trillion debt limit through March 2017, and is intended to take conservative pressure off new House speaker Paul Ryan before he takes office.

Boehner’s plan is for members to vote on the deal Wednesday.

The budget pact, in concert with a must-pass increase in the federal borrowing limit, would solve the thorniest issues awaiting Ryan, who is set to be elected speaker on Thursday.

The deal would also take budget showdowns and government shutdown fights off the table until after the 2016 presidential election.

The emerging framework would give both the Pentagon and domestic agencies two years of budget relief of $80 billion.

A chief selling point for GOP leaders is that the alternative is chaos and a stand-alone debt limit increase that might be forced on Republicans. But conservatives in the conference who drove Boehner to resign were not ready to fall in line.

“This is again just the umpteenth time that you have this big, big, huge deal that’ll last for two years and we were told nothing about it,” said Rep. John Fleming of Louisiana.

“I’m not excited about it at all,” said Rep. Matt Salmon, R-Ariz. “A two-year budget deal that raises the debt ceiling for basically the entire term of this presidency.”

The budget side of the deal is aimed at undoing automatic spending cuts which are a byproduct of a 2011 budget and debt deal and the failure of Washington to subsequently tackle the government’s fiscal woes. GOP defense hawks are a driving force, intent on reversing the automatic cuts and getting more money for the military.

The tentative pact anticipates designating further increases for the Pentagon as emergency war funds that can be made exempt from budget caps. Offsetting spending cuts that would pay for domestic spending increases included curbs on certain Medicare payments for outpatient services provided by hospitals and an extension of a 2-percentage-point cut in Medicare payments to doctors through the end of a 10-year budget.

There’s also a drawdown from the Strategic Petroleum Reserve, reforms to crop insurance, and savings reaped from a Justice Department funds for crime victims and involving assets seized from criminals.

Negotiators looked to address two other key issues as well: a shortfall looming next year in Social Security payments to the disabled and a large increase for many retirees in Medicare premiums and deductibles for doctors’ visits and other outpatient care.

The deal, which would apply to the 2016-17 budget years, resembles a pact that Ryan himself put together two years ago in concert with Sen. Patty Murray, D-Wash., that eased automatic spending cuts for the 2014-15 budget years. A lot of conservatives disliked that measure.

Just days are left for the deal to come together before Ryan is elected Thursday to replace Boehner, R-Ohio, who is leaving Congress under pressure from conservative lawmakers angered by his history of seeking compromise and Democratic votes on issues like the budget.