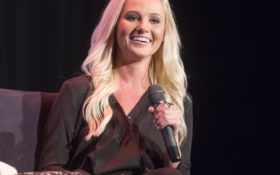 In her “Final Thoughts” broadcast on Fox News Insider, Lahren highlights all of President Donald Trump’s accomplishments in his first year.

It’s a staggering list that the mainstream media would never talk about.

In the segment, Lauren destroys the fake news media that only gives negative news about the president while praising his predecessor, former President Barack Obama.

She states that she thinks that “The mainstream media wants to see Trump fail badly, even at the expense of the American people. Truth is, President Trump has done more in 11 months than Barack Obama did in four, or even eight years.”

Lahren starts off her argument slamming that liberal media that refuses to cover Trump’s success with recovering our economy.

“228,000 jobs created last month. An almost 30 percent gain in the stock market since Trump was elected. Gross Domestic Product is set to hit three consecutive quarters of more than three percent growth. The jobless rate is at a 17-year low,” she explained.

Sticking it to the know-nothing Democrats anti-Trump’s efforts to destabalize our nation, she says “How about immigration? Wall prototypes are in the works. Beyond that, the Department of Homeland Security reports border patrol arrests have dropped to a 45-year low. That’s down 25 percent from this time last year.”

And the military? Lahren bashes the leftists that try to resist Trump’s efforts to beef up our fighting forces.

“Ask ISIS how it feels to battle an American fighting force that’s actually allowed to engage AND WIN. President Trump is also putting an end to the transgender-military social experiment, asking for an emergency stay to delay a court order opening the military to transgender recruits. The military isn’t about feelings, it’s about the mission. Trump gets it.”

Fake news CNN has covered one accomplishment of Trump’s — his willingness to keep his promises, no matter how unpopular they are.

Lahren can agree that Trump is true to his promises,”unlike the last three presidents, who promised to recognize Jerusalem as Israel’s capital, but never did. Under President Trump’s historic action, Israel will no longer be kicked in the face.”

As for tax reform, the liberals are furious.

Lahren slams the Democrats that are refuting Trump’s tax reform, “The Senate felt Trump’s kick in the butt, and passed the biggest rewrite of the tax system since the Reagan Administration. The Democrats are against it, because they think they know how to spend your money better than you do. And the thought of giving this president any victory, even if it’ll help Americans, makes them physically ill.”

Like Lahren says, it would definitely be a Christmas miracle if liberals could highlight just one Trump achievement… but we all know that will not be happening.

Oops, are we not supposed to say “Christmas”?