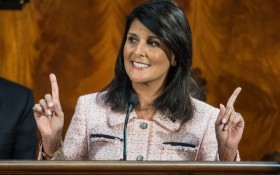 Under President Donald Trump, no one but the U.S. president decides what America does or doesn’t do. And they will not to tell the U.S. where to locate its embassy.

On Monday, the United States vetoed a resolution supported by the 14 other U.N. Security Council members that would have required Trump to rescind his declaration of Jerusalem as the capital of Israel, a vote that showed the depth of global opposition to the U.S. move.

The United States was certain to veto the Egyptian-sponsored resolution, but its Arab supporters wanted the vote to demonstrate that countries everywhere and even many U.S. allies such as Britain, France and Japan are against Trump’s action.

The Palestinians immediately announced that they will seek a resolution with similar demands in the 193-member General Assembly, where there are no vetoes. But unlike the Security Council, the assembly’s resolutions are not legally binding.

Palestinian Ambassador Riyad Mansour told reporters after meeting with the General Assembly president that he expects a vote this week. He said he hopes for “overwhelming support” telling the Trump administration that the international community doesn’t accept the U.S. position, which he said violates international law and Security Council and General Assembly resolutions.

The Trump administration responded strongly and with a clear message — No one pushes the United States around anymore.

Haley called the Security Council resolution “an insult” that won’t be forgotten, saying the United Nations forced the U.S. to cast a veto simply because of its right to decide where to put its embassy.

The vetoed resolution would have demanded that all countries comply with 10 resolutions on Jerusalem, including requirements that the city’s final status be decided in direct negotiations between Israel and the Palestinians.

It would also have affirmed that “any decisions and actions which purport to have altered, the character, status or demographic composition of the holy city of Jerusalem have no legal effect, are null and void and must be rescinded.”

Haley told the council “the United States has never been more committed to peace in the Middle East,” and called accusations that the U.S. is setting back the prospect for peace “scandalous.”

But Palestinian President Mahmoud Abbas, in some of his sharpest rhetoric since Trump’s announcement, reiterated in public comments to senior Palestinian officials Monday that he will no longer accept the U.S. as a Mideast mediator.

He said “a crazy person wouldn’t accept” that role for Washington after Trump’s action.

Haley said Trump “took great care not to prejudge final status negotiations in any way, including the specific boundaries of Israeli sovereignty in Jerusalem,” which must be decided by the Israelis and Palestinians. And she insisted that this position “is fully in line with the previous Security Council resolutions.”

But one by one, ambassadors of the 14 countries that supported the resolution said after the vote that the U.S. violated council resolutions which make clear that no country can unilaterally decide that Jerusalem is the capital of Israel.

British Ambassador Matthew Rycroft said, “The status of Jerusalem should be determined through a negotiated settlement between the Israelis and the Palestinians, and should ultimately be the shared capital of the Israeli and Palestinian states.”

The resolution that was vetoed would have called on “all states to refrain from the establishment of diplomatic missions in the holy city of Jerusalem,” citing a 1980 council resolution.

Haley was adamant that “the United States will not be told by any country where we can put our embassy.”

The vetoed resolution would also have reiterated a call to reverse “the negative trends on the ground that are imperiling the two-state solution” that would see the states of Israel and the Palestine living side-by-side in peace. And it would have called for intensified and accelerated international and regional efforts to achieve Middle East peace.

The only support for the United States came from Israel.

Israeli Prime Minister Benjamin Netanyahu thanked the U.S. for using its veto in a video posted to Facebook.

He said Haley “lit a candle of truth” and dispelled “lies.”

Netanyahu compared Haley to the Maccabees, Jewish warriors commemorated during the current Jewish holiday of Hannukkah for revolting against Hellenic rulers, rededicating the Jewish Temple in Jerusalem and establishing a Jewish Kingdom in Judea.

In Netanyahu’s words, “One defeated the many, truth defeated lies.”