Massive voter fraud EXPOSED (it's worse than we thought!) - The Horn News 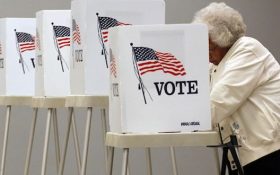 Legal watchdog group Judicial Watch announced that they have filed a federal lawsuit against the State of California and the Los Angeles County over massive amounts of voter fraud.

What they’ve found is shocking — even for conservatives already aware of the massive amounts of voter fraud influencing our elections. California, it turns out, has a voter registration rates exceeding 100% of their legal citizens.

The federal lawsuit was filed in the United States District Court for the Central District of California’s Western Division on behalf of Judicial Watch, Election Integrity Project California, Inc., and several others, who are all lawfully registered voters in Los Angeles County.

Out of California’s 58 counties, a total of 11 have registration rates that exceed 100% of age-eligible citizenry.

According to data published by the EAC, Los Angeles county has more voter rolls than it does citizens who are age-eligible to vote. Specifically, they have a registration rate of 112%.

Judicial Watch explains in their press release that  even inactive registration may still vote on election day.

Inactive registrations of voters that move to other states are most vulnerable to fraudulent voting by a third party because they are unlikely to keep track of the use or communications having to do with an old registration.

Inactive registrations are also vulnerable to abusers who plan to double-vote on the same election day, but in two different jurisdictions.

On two different accounts in November, the legal watchdogs requested documents with the number of inactive Los Angeles County registrations, and were told on both occasions that they were no responsive records.

And last summer, Judicial Watch requested records from both Los Angeles County and the State of California that they are NVRA required to make publicly available–no response was produced.

The National Voter Registration Act (NVRA) requires every state to implement programs to remove ineligible registrants, and to make documentation available to the public.

In the lawsuit filed, Judicil Watch asks the court to stop Los Angeles County and the State of California from violating NVRA laws and “develop and implement a general program that makes a reasonable effort to remove from Los Angeles County’s rolls the registrations of ineligible registrants.”

There were a total of 12 states that received notice-of-violation letters from Judicial Watch in August 2017, California was one of those.

The other 11 states that were sent the threatening letters, were told if they failed to take action, a suit would be filed.

Judicial Watch previously filed suits under the NVRA against Ohio and Indiana that had a positive outcome–they were forced to take action to clean up their voting rolls.

They are currently suing Kentucky for failure to remove ineligible voters, and the State of Maryland and Montgomery County over failure to release voting-related records.

“California may have the dirtiest election rolls in the country,” said Judicial Watch President Tom Fitton. “Federal law requires states to take reasonable steps to clean up their voting rolls. Dirty voting rolls can mean dirty elections. This lawsuit aims to ensure that citizens of California can have more confidence that their elections are fair and honest.”

The entire State of California has a registration rate of about 101% of its age-eligible citizenry.