Rubio will sabotage Trump's tax bill (unless he gets what he wants!) - The Horn News 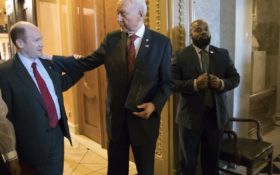 Once again, establishment Republicans are doing everything they can to grab headlines — instead of helping the American people.

Itt’s a complication that’s likely to be resolved. Critics note, though, that the issue should have been brought up days ago during negotiations, instead of using it to grab cheap political points.

The Florida senator declared Thursday that he’ll vote against the $1.5 trillion bill unless House and Senate negotiators expand the tax credit that low-income Americans can claim for their children.

That puts the Republicans’ razor-thin margin in the Senate closer to the edge. The GOP leaders are straining to muscle the bill through Congress next week, handing Trump his biggest legislative victory for Christmas.

Senate Republicans could still pass the package without Rubio’s vote, but they would be cutting it extremely close. An original version was approved 51-49 — with Rubio’s support. The co-sponsor of Rubio’s proposed change, Republican Sen. Mike Lee of Utah, is undecided on the overall bill and is pushing to make the credit as generous as possible, said Lee spokesman Conn Carroll.

The Senate turmoil erupted the same day that a key faction of House Republicans came out in favor of the bill, boosting its chances. Members of the conservative House Freedom Caucus predicted the vast majority of their members would support the package.

The up-and-down turns came a day after House and Senate Republican leaders forged an agreement in principle on the most sweeping overhaul of the nation’s tax laws in more than 30 years. The package would give generous tax cuts Americans — and it is expected to boost the economy in a big way.

Republican leaders predicted swift passage next week, sending the bill to Trump for his signature.

At the White House, Trump said he was confident that Rubio will get onboard.

“He’s really been a great guy and very supportive. I think that Sen. Rubio will be there,” said Trump, who belittled Rubio during the 2016 GOP presidential primaries, calling him “little Marco.”

The tax package would double the per-child tax credit from $1,000 to $2,000. The bill makes a portion of the credit — $1,100 — available to families even if they owe no income tax. They would receive the money in the form of a tax refund, which is why it’s called a “refundable” tax credit. Rubio wants to increase this amount but wouldn’t say by how much.

Why wait until last minute, critics asked, when the curtain is already drawn on the tax bill?

During debate on the Senate version of the bill, Rubio proposed a change that would have made the entire $2,000 credit available to families, even if they owe no income tax, but it was soundly defeated.

A few days after the earlier Senate vote, Rubio tweeted a link to a news story that said GOP leaders were indeed considering scaling back the corporate tax cut — but not to pay for an expanded child tax credit.

“They freaked out when I proposed small reduction in Corporate tax cut to pay for cut for working families. Now this?” Rubio tweeted.

The final package slashes the corporate rate from 35 percent to 21 percent. The initial Senate and House bills had set it at 20 percent.

“We won everything in the child tax credit,” Portman said. When asked if it could be changed further to appease Rubio, Portman said: “We’ve already won. I mean, we should celebrate our victory.”

Rubio’s opposition comes at a bad time for Senate Republicans, with two of them missing votes this week because of illness.

John McCain of Arizona, who is 81, is at a Washington-area military hospital being treated for the side effects of brain cancer treatment, and 80-year-old Thad Cochran of Mississippi had a non-melanoma lesion removed from his nose earlier this week. GOP leaders are hopeful they will be available next week.

Rubio needs to stop playing games and work with his fellow Republicans on reaching an agreement.

He owes it to the American people.