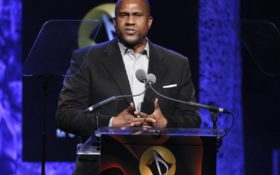 Why can’t these liberal news anchors keep their hands to themselves?

PBS has suspended radio and TV host Tavis Smiley after finding what it called “troubling allegations” of sexual misconduct, the latest in a long line of left-leaning news stars disgraced in 2017.

His suspension makes him the second high-profile star to be ousted from PBS programming, following Bob Rose.

Smiley has, on many occasions, projected hatred towards President Donald Trump and his supporters. Now, it is time for him to take a look at his own evils.

The Public Broadcasting Service said Wednesday an independent investigation uncovered “multiple, credible allegations of conduct that is inconsistent with the values and standards of PBS.” His show’s page at PBS was scrubbed on Thursday.

Smiley shot back on Facebook, saying PBS “overreacted” and were wrong to fire him.

Most people can ask for forgiveness for their faults and wrongdoings… but holier-than-thou liberals like Smiley cannot admit their own mistakes!

Smiley has drawn the ire of conservatives for years — but under Trump his behavior grew out-of-control.

On several occasions, he has called Trump a racist, and even claimed that Trump’s black friends help his racism.

He has worked for six networks over a 30-year career. His radio program “The Tavis Smiley Show” was distributed by Public Radio International from 2005 to 2013. He has been with PBS for 14 seasons and some 3,000 episodes.

According to Variety, the investigation into Smiley found that he had engaged in sexual relationships with multiple subordinates and “creating a verbally abusive and threatening environment.”

Pray for this morally corrupt man that he is able to release his demons and secrets from within him!