4 viciously murdered inside their home on Christmas - The Horn News 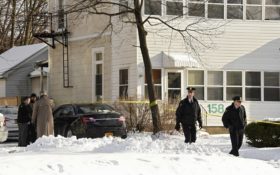 Authorities have released the names of two women and two children slain in their upstate New York apartment and police are asking the public for information.

Troy police on Thursday identified the victims as 36-year-old Shanta Myers; her children, 11-year-old Jeremiah Myers and 5-year-old Shanise Myers; and 22-year-old Brandi Mells. Police say the women were in a relationship.

Officials have released few details since a property manager found the bodies Tuesday in a basement apartment in a home along the Hudson River in Troy, just north of Albany.

Police Chief John Tedesco says he has “never seen savagery like this” in 42 years in law enforcement.

Police are asking the public for any information relating to the case. No suspect has been identified publicly.