4 things you should know about today's U.S. elections - The Horn News 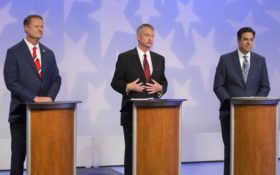 Tuesday’s primary elections in Pennsylvania will decide the fate of President Donald Trump’s pick for U.S. Senate — and that means lasting impacts for the president.

A look at some of the key races:

Eighty-four candidates are running in 18 House districts in light of new court-ordered redrawn congressional district maps in February. That’s more than any time since 1984, when Pennsylvania had 23 seats in the House.

Five of Pennsylvania’s 13 GOP House members have quit or are not running again, helping create seven House vacancies, the most in Pennsylvania since 1976.

Moderate Charlie Dent is abandoning Pennsylvania’s new 7th District. Six Democrats are running in this district, which reunified Democratic-leaning cities in the east and cut out some of Republican-leaning central Pennsylvania.

Barletta is heavily favored over state Rep. Jim Christiana to become the Republican challenger for Democratic Sen. Bob Casey, who is seeking a third term in November.

Barletta was a Trump supporter before the 2016 presidential nomination was settled. The loyalty won Barletta Trump’s early support in the Senate race, as well as recorded telephone calls last weekend featuring the president backing Barletta “fully, strongly and proudly.”

Ohio, Pennsylvania and West Virginia are all seen as key to the 2018 Senate election landscape as states where Trump won in 2016 and Democratic senators are seeking re-election this year.

Democrats seldom have the luxury of choice in Nebraska, where Republicans have dominated for 80 years. But, for the first time, Omaha-area Democrats have options for the state’s lone urban House district.

Ashford, a former Republican, served one term in Congress as a Democrat before Republican Don Bacon beat him for re-election in 2016. Ashford, 69, has the endorsement of the Democratic establishment, including the Democratic Congressional Campaign Committee, and is portraying himself as the one who can win in a swing-voting district in November.

Eastman, 46, is arguing that Democrats have lost by not offering voters a distinct choice and is campaigning on devoutly Democratic themes such as single-payer government-run health insurance, gun control and reducing climate change.

It was a rough night for Republican members of Congress a week ago. Two lost in Indiana’s Senate primary, while one fell in the West Virginia Senate primary. North Carolina Rep. Robert Pittenger lost the primary to keep his own seat.

The four-term Republican House member and founding member of the conservative House Republicans’ Freedom Caucus is one of three GOP candidates for governor in Idaho, a state so heavily Republican that the primary goes a long way to determining the general election.

Is one little pill standing between you and the heart health your body has been craving? [sponsored]

Ten Republicans are vying for Oregon’s nomination for governor — the most in more than a century. The interest among candidates belies the uphill climb for the party in the Democratic-leaning state.

Of the 10, businessman Sam Carpenter, state Rep. Knute Buehler and retired Navy pilot Greg Wooldridge have emerged as leaders in fundraising and GOP straw polls. However, Democratic Gov. Kate Brown remains the favorite to win in November. Brown became governor in 2015 upon the resignation of Gov. John Kitzhaber following an ethics scandal, and she won a special election in 2016.

Oregon is among eight states where Democrats control the governorship and both houses of the state legislature. Voters who identify as Democrats also outnumber their Republican counterparts by more than 9 percentage points.