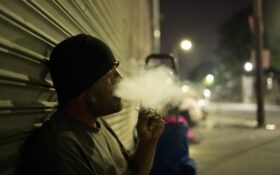 The Skid Row neighborhood in Los Angeles is a notorious enclave known for mass homelessness.

More than 5,000, squatting in tents on the street.

And it has recently become the epicenter for fraud after four people admitted to paying the homeless in cigarettes and cash in exchange for petition signatures as part of grand election fraud scheme during 2016 and 2018.

They paid the homeless a dollar each to sign their names.

The four men plead no contest to varying charges, according to the Los Angeles County District Attorney Office.

According to Daily Mail:

Williams and Huntley were charged with circulating an initiative with false names. They each received three years of probation.

The remaining five defendants are still facing a slew of charges amid the plot, although one person involved — Jakara Fati Mardis — is still at large, reports KTLA.

Prosecutors called the voter fraud scheme an “assault on democracy.”

The homeless people who were solicited in the plot have not faced charges, according to Daily Mail.