4 lies from the Golden Globes (BUSTED!) - The Horn News 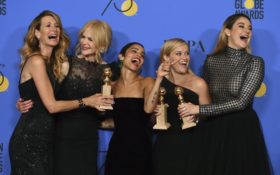 Hollywood’s rich liberal elite took to the red carpet Sunday and paraded about on television for the 75th annual Golden Globe awards — and the theme of the night was clear right from the beginning.

It was a night for the liberal agenda.

Every few months, multimillionaire celebrities leave their gated mansions and gather to sip expensive champagne and congratulate one another on being wonderful. But last night’s award show was the worst example of liberal elitism yet.

Nearly every actor, producer, and director wore black in a symbol of unity for liberal causes and made thinly veiled jabs at conservatives, while they willfully ignored their own hypocrisy. And the mainstream media ate it up.

But we’re not fooled. The Horn News gathered the four worst lies from the 2018 Golden Globe awards these liberals pushed down America’s throat.

And it’s not pretty.

Lie #1 — Some of those “speaking out” have been accused

When James Franco took to the stage to accept his best actor in a comedy or musical award, his fellow leftist celebrities roared with approval.

They cheered and hooted while Franco thanked them — but there was one actress who wasn’t cheering.

“Shortly after Franco’s win for ‘The Disaster Artist,’ an unverified Twitter account for actress Ally Sheedy began slamming the win,” Fox News pointed out. Sheedy’s account implied that Franco, who worked with Sheedy on the 2014 play “The Long Shrift,” was himself guilty of sexual harassment.

Ally Sheedy needs to be asked about this! #GoldenGlobes pic.twitter.com/q6pWkf8U5w

Hypocrisy, thy name is Hollywood.

Actress and producer Connie Britton made a statement to the world when she showed up to the Golden Globes red carpet wearing a $380 t-shirt that read, “Poverty is sexist.”

It’s mind-numbing that anyone would believe this embarrassingly wrong fact. As The Gateway Pundit pointed out, homelessness disproportionately effects men.

It’s worse that Britton would spend $380 to shove this liberal insanity in the face of Americans.

For reference, the average social security recipient brings in $353 a week.

After winning the award for best actress in a TV drama, outspoken Scientologist Elizabeth Moss used her time on stage to rant about “intolerance and injustice” in the world.

What Elisabeth Moss said was amazing. I hope she starts within herself and examines the injustices of Scientology. #GoldenGlobes

As I say at every award show: Elisabeth Moss funds and defends an organization that profits off of human trafficking and child abuse. Her pretty words mean nothing. pic.twitter.com/OdnDY3pVFa

This tweet. There's also the fun fact that Elisabeth Moss is a Scientologist, and they believe in covering up for their members when it comes to sexual assault, and who knows what else. I will never watch the show, but I am interested in reading the book, at least. https://t.co/zyJhGCCRyb

Apparently sexual misconduct only counts if the accused man is a conservative.

Not one liberal celebrity uttered a single reference to the #MeToo movement’s most high profile downfall: NBC News’ Matt Lauer.

Of course, Lauer’s misconduct had been known to industry insiders for years.

In fact, in 2008 liberals roared with laughter as Lauer’s inappropriate behavior was joked about during an award show honoring him.

Apparently, it’s only social justice for Hollywood if the subject of criticism is a conservative.